Peirce Date is a crazy thing where The Thrill finds two willing strangers to go on a blind date at our very own dining hall. It’s cute. It’s funny. And it’s pretty awkward.  Wanna go on a Peirce Date yourself? Wanna nominate a friend?  Let us know!

Last Thursday night at around 6:59 p.m., two young hopefuls looked for love (or just something semi-edible) in the hustle and bustle of Peirce.

Find out how it went after the jump! 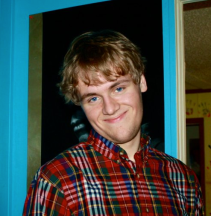 Is this the face that launched a thousand ships?

McLees, leaning lovingly on a tree

I spotted Collison across Thomas Dining Hall, pacing nervously. Coming off of a rehearsal, he was tired, but expressed excitement for his date. McLees arrived shortly after, smiling despite her two hour shift at Club Olin. After introductions, I left these two young’uns alone. Well, as alone as you can be in Peirce.

McLees: It went well. I didn’t have any exceptions. It was definitely less awkward than I thought it would be. We discussed music, and movies, and food.

How about the atmosphere…

Collison got up a few times to retry the servery. I asked both Collison and McLees how this affected their date dynamics.

Collison: Well, each time I excused myself gracefully.

McLees: It was a little awkward.

McLees: Well when you’re in Peirce after 7:00 there’s like five people. It starts to shut down. I don’t know if I’d ever have an actual date in Peirce without it being Peirce-themed. It’s not bad with the limited options at Kenyon.

How does Peirce stand up to other date locales in Gambier?

Collison: Eh, probably not the best. I haven’t had too many romantic encounters. But I would say pretty much anywhere outside is better than Peirce. I don’t know, everyone can see you and there are a ton of people around. I’m not one for secrecy, but you’ve people doing shenanigans.

McLees: It was nice, you know. The sound acoustics always make Peirce interesting. But it was not horribly distracting.

What about a second date?

Collison: (Ed.: Before answering, Collison let out a long sigh.) She seems cool. I liked hanging out with her.

McLees: I guess so. Sure.