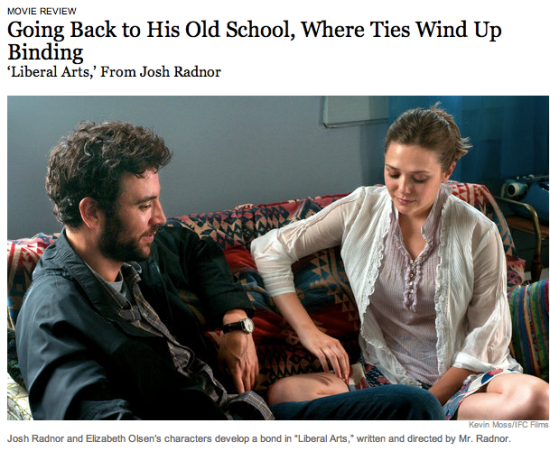 In a review that seems to be at least a slight upgrade from yesterday’s NPR review, Stephen Holden of The New York Times has deemed Liberal Arts “slick [and] feel-good,” and gives mixed reviews to its star performers.

Josh Radnor is “smug [and] obsequious,” although Allison Janney’s character is “incisively written and acted.” Elizabeth Olsen “gets Zibby’s mixture of bravado, vulnerability and defiance absolutely right.” Holden says Liberal Arts is an improvement upon Radnor’s last film, happythankyoumoreplease, but remarks that it still exudes a “desperation to be liked.”

Kenyon is barely mentioned: the campus is described only as “leafy,” and this comment is unfortunately adjacent to a quote about “the college as a prison.” For the Times‘ full analysis, check out the review here. You can also find it in the print edition in Peirce on page C8.