For those of us who came to Kenyon fresh off a long career as high school theater nerds (being president of the drama club remains one of my biggest life accomplishments, even though I did so little that the club assumed I’d quit and appointed a replacement), one of Kenyon’s most attractive features is its theaters: not one, not two, but three of them. Of course, there are several other acceptable performance spaces around campus — now that Brave Potato has put on a show in the graveyard, it’s only a matter of time before the Kokosing Gap Trail gets the star treatment (Ed.: Been there, done that.) — but there are only three that have the distinct honor of being called a theater. I’m talking, of course, about the Bolton, the Hill, and the Black Box. What’s the difference, you might ask? Read on, Thrill-Seekers: 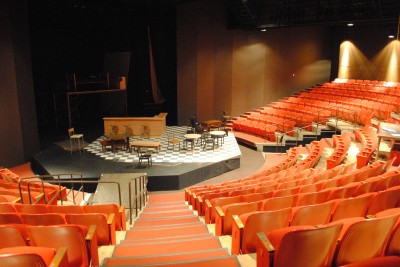 Built in 1978, Kenyon’s main stage is spacious and versatile, making it the ideal location for the three shows per year that are directed by Kenyon drama professors. The Bolton also hosts the Spring Dance Concert, as well as several drama classes (which can be slightly inconvenient if you’re a first-year Baby Drama student trying to stage J.K. Rowling’s “The Tale of the Three Brothers” on the set of William Shakespeare’s Hamlet). The stage is currently set for KCDC’s upcoming performance of Balm in Gilead by Lanford Wilson, directed by Ben Viccellio and premiering on Oct. 18.

Special Feature: For all those who believe, as I do, that the traditional stage right/stage left exit/entrance is for nerds and squares, the Bolton has an alternative that satisfies both audience and performer: the vomitorium. 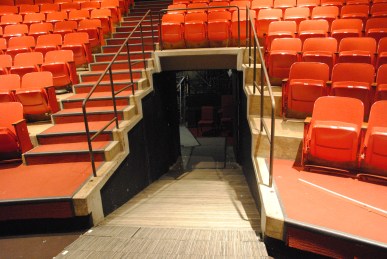 Yeah, it’s actually called a vomitorium. Like auditorium, but with more vomit.

These passageways, which are positioned on either side of the stage, allow actors to enter and exit below the audience; also, the steep inclines are great for somersaults. Not that I would know. 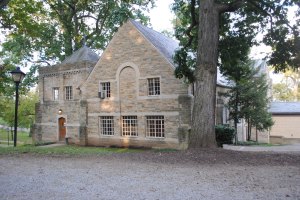 The Hill is the oldest of Kenyon’s theaters, built in 1937, and it is home to the offices of Kenyon’s drama and film professors. The theater itself is the metaphorical Goldilocks of Kenyon performance spaces: traditional proscenium stage, not too big, not too small. It’s mostly used for performances of senior theses, as well as for drama classes and the Fall Dance Concert. Legend has it that the Hill is haunted by the ghosts of two students who died the year it was built, and by “legend,” I mean “the Internet.”

Special Feature: Movie buffs might recognize the inside of the Hill from a scene in Josh Radnor’s Liberal Arts, which premiered at Kenyon on Sept. 2. So if you ever feel the urge to celebrate Hollywood by recreating cinema’s most awkwardly lingering hug, you’ve come to the right place.

When banks close in other towns, they might be either demolished or absorbed by the local Walmart, but in Gambier, they are painted black and turned into theaters. The Black Box is the epitome of “non-traditional,” which makes it ideal for student-run productions and sketch comedy. Recent renovations, which include a partition in front of the doorway and blinds that actually make the room darker, have made it slightly easier to imagine that a play could be staged in such a sparse setting.

Special Feature: As we’ve seen in countless films, there are few things in life more exciting than big safes that may or may not contain large amounts of cash. You won’t find any money in the Black Box safe, which is leftover from when the building was a bank, but you will find oodles of fun!

That’s all for now, Thrill-Seekers. Stay on the lookout for my next post, in which I will be visiting the offices of drama professors Ben Viccellio and Jonathan Tazewell and deciding which one has the comfiest chairs. (Spoiler alert: it’s a tie!)