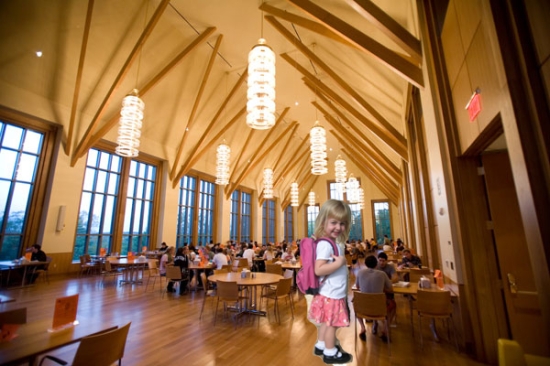 It feels like only yesterday (it was yesterday)  that the severy was jammed with hundreds of little Tiffanys and Jimmys.*  Wide-eyed, sticky, and searching for a tray, this fresh batch of potential Kenyon students really added some much needed novelty to our beginning of the week funk. But now, the absence of these awkward, yet at times bold (a.k.a. that one girl in Quest for Justice), high schoolers have left some us wondering: “where did all the prospies go?”

The obvious answer: they went home. So probably New York, California, or Ohio. But what if that wasn’t the case.  What if little Jimmy/Tiffany didn’t want to go home? What if he/she stayed at Kenyon indefinitely? Sleeping on the floor of your McBride triple for the rest of the semester. But how did he/she escape the clutches of his/her parents at the end of visiting weekend?

Upon putting his final Peirce meal dishes on the dish return, Jimmy distracted his mother by telling her to try some of that “delicious” Peirce coffee. As soon as she turned towards the servery, Jimmy jumped into the dish return and hopped out on the other side. The kind and sweet AVI workers welcomed Jimmy with open arms, though they were surprised that he said “the food” was a highlight of his weekend.  A polite boy, Jimmy helped clean dishes and cups before searching for his host.

Jimmy hoped to find his host, Jerry*, in 3rd floor Ascension because Jerry had told him that he liked studying there because it “reminded him of the Gryffindor common room.” Sadly, Jimmy had to walk all the way back to Gund to find Jerry playing WOW while only pretending to read Frantz Fanon. Needless to say, Jimmy was disappointed. But his mood seemed to improve when Jerry’s roommate made popcorn. Jimmy loves popcorn.

The second “hypothetical scenario”: The girl who lived in the tree

The unique and somewhat quirky Upside Down Tree caught Tiffy’s eye on her Sunday afternoon tour. She described it to her mother on the phone later that night: “It’s like that tree in the Lion King and Grandmother Willow had a child.” On her numerous walks (four in total) from Norton to Peirce, Tiffany stopped to touch the leaves, feel the gashes in the bark and “just sit with her thoughts” in the tree.

Tiffany was clearly developing an attachment to the tree. During Introduction to Film, Tiffany found herself distracted by all the trees in Slum Dog Millionaire, thus having a hard time focusing on the cinematography or, you know, the plot. (Tiffany did not have a lot to add to the discussion.) After saying  adieu to her host, who described her prospie as fine, Tiffany announced to her parents that she was giving up her capitalist ways  inorder to live in the most glorious tree that nature had ever given us.  Tiffany’s parents accepted her new lifestyle knowing that once it got cold/wet enough, their little Tiffy would be on the next plane back home. But for now she spends her days suspended amongst the branches.

So it turns out you and your prospie, Todd*, really hit off. No like actually, you love this guy. He’s super funny, smart, has great taste in music and keeps on buying you snacks! In all honesty you like him a little better than your roommate, Frank, who you are pretty sure is using your tissues without asking. (Todd would never do that.)

On one fateful walk down Middle Path, you jokingly suggested to Todd, “You know what would be hilarious? If you dropped out of high school and became my new roommate. We would be like best friends!” And then it hit you: That’s a brillant idea. Best one you ever had, hands down. Yeah sure, Todd would then be a high school dropout, not be enrolled in any classes, and have to live basically as a fugitive at Kenyon. But those are mere trifles when compared to losing a potential best friend! And let’s be honest, Frank would be stoked to live in Peirce Tower.

**This idea came to me when I observed a mother of a prospie staring at the dish return, apparently mesmerized,  for a good three or four minutes.