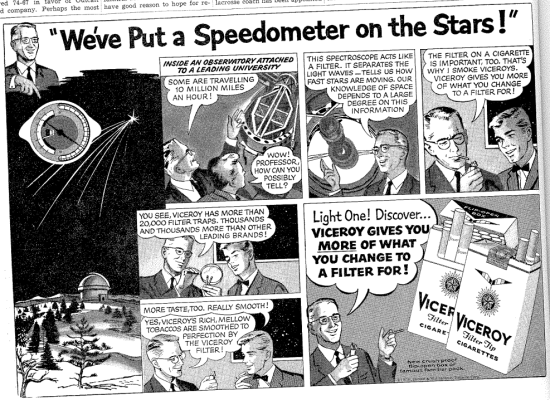 It’s back, and it’s got a new trick! From the Collegian Archives is 10 times as slick as the last time, or something along those lines, now that Thrill intern Reed Dickerson ’16 is helping me out with finding articles and getting scans. An underling of my very own! It’s like a dream come true!

The Collegian of 1957 continues its weird obsession with Viceroys through this comic, whose logic is a little…suspect. I’m still trying to puzzle out where the science is connected. Is it just “this is an interesting thing, and cigarettes are also interesting things, so you should smoke them?” I guess you run out of ideas when you print ads for the same cigarette brand pretty much every week, but this is just bizarre writing.

After the break: Slapstick, movie premieres, and Kenyon classes on dog sledding and being a Mountie!

The glasses sitting off to the side are the funniest part here. “Oh no, I’d better take off my glasses before I eat this pie with just my face! I might get fruit filling on them, and not be able to see the pie as well!”

Wikipedia says that 1957 was indeed the release year of the original version of the famous western 3:10 to Yuma (remade into a feature film starring Russell Crowe and Christian Bale about five years ago), so it’s neat to find an ad for the original showing in the admittedly rinky-dink Mount Vernon theater, which was probably a good deal smaller at the time.

This has to be a joke. There is no way this isn’t a joke. A Kenyon language professor and TV personality teaches courses on being a Mountie and dog sledding? Surely, this article is from the bygone days when the Collegian had a sense of humor. (If I disappear days after writing this article, that sentence is to blame, and you should probably call the police and tell them to arrest my editors. All of them. Just to be safe.) If Kenyon actually had dog sledding and Mountie classes in 1957, I’m asking for a time machine for Christmas.

Again, I’d like to thank Thrill intern Reed Dickerson ’16, especially for that last one, which was tucked away in a corner I never would have noticed myself. Now stop procrastinating and get back to doing your reading for Gendered Economic Postcolonialism in Modern Dance Forms.