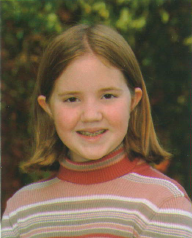 Whatever, let’s not talk about it.

As you can tell from this yearbook photo, I was in fifth grade once. This was a time before I attended the 84th best party school in the nation; a quieter time of turtlenecks and braces.We received such a great response from our first article that The Thrill has decided to continue this series of early (and some might say “awkward”) writing from Kenyon students.

A note from Lauren: “A few months ago I did the look through old journals and glean wisdom from my former self thing, like you just posted. Here were some angsty gems.”

“I realized that your mirror image is actually REVERSE. I can’t believe I hadn’t thought of that before. I always put my hair to what I see as my left in the mirror in a low ponytail. But to everyone else, it’s on their right. Nooo, that’s messed up. So really what I consider to be my better eyebrow is on the… right!?”

Wait… I genuinely want to know which one is my “better eyebrow.” Read more of Lauren’s tween angst here.

“I also developed an underlying hate for automatic toilets at rest stops. Every thing (well, almost) humans make to try and make life easier ends up just the opposite. I’m peeing and feel this annoying sea spray of water on my ass – its flushing but I’m still sitting down. I get up and it’s unresponsive when I actually want it to flush.”

Grace Gardner ’13 really gets what Lauren is saying about the public rest stop thing:

The visuals really make this a masterpiece.

“First thing, (There were 2.) I pulled down my pants got some tolite paper and put it on the seat, gone with the wind. I had no more tolite paper on the seat. So so so many times I tryed it alot until I said to myself, “Ami and Pop will be waiting I wont [go] out without going to the bathroom. I took one last look… tana! (Ed: maybe this was supposed to be Tada?) ALL THAT TIME it was air from the top of the bathroom! I went and told what hapend. I finly went.

This last entry from Katherine Tallman ’15 is particularly appropriate, since we just saw Beyonce kill it at the Super Bowl halftime show this past Sunday, with no nip slips or wardrobe malfunctions.

Just really quickly today was the superbowl and the halftime show was awful! First there was a bunch of rappers (ugh) One went rara America I’m a cowboy (not at all pleasing) then Janet Jackson and Justin Timberlick went on and Justin pulled off Janet’s bra! I’m not sure if it was planned but Janet seemed shocked. Besides that this week has been really boring.

Katherine’s entry is a sober reminder of a confusing time when the Super Bowl halftime show was so big, and we were so small.

Do you have any journal entries similar to these? Send them to us at thekenyonthrill@gmail.com!