We asked for your job search stories, and you delivered. At this time of year, when everyone is desperately seeking summer work, soothe yourself with advice from of a Class of 2012 alumna whose job hunt has been a long and winding road. If you’ve got tales of employment woe, advice or anecdotes you’d like to see on The Thrill, hit a blog up via Gmail at thekenyonthrill@gmail.com. 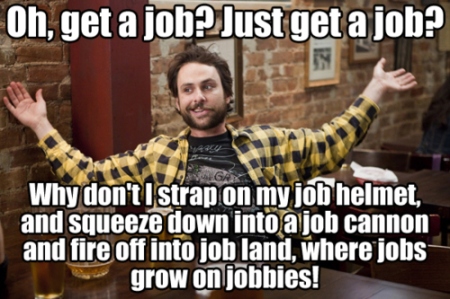 Between Thanksgiving break of senior year and mid-September after graduation, I submitted 60 job applications, had 8 interviews, got 14 outright rejections and countless ignored emails, completed 2 internships… and received one job offer, which I accepted with as much exhilaration and relief as a newly-adopted pound puppy. My boss is fantastic and I enjoy what I do, but my position is only temporary thus far, meaning that I don’t yet have health benefits or sick leave or an office phone or even a swipe card to the building. But in this climate, I don’t complain about that too often.

Because it is a meat-grinder out there, and the application process may indeed produce traumatic flashbacks to applying to college, when you thought that your entire future rode on the decision of a very small group of people who saw just a pre-packaged slice of yourself and your potential. And just as you had to have a spread of safeties, likelies, and reaches during senior year of high school, during senior year of college you’ll have to be prepared to aim a little low (or wide) and swallow a lot of frustration.

The seeming unsellability of my English major credentials made me, in my desperation, apply to be a marketing gal for the bus company that provides tours of “Sex and the City” locales, a “customer happiness associate” for a cupcake bakery, and an assistant to the publisher of “America’s favorite pencil puzzles.” I took pre-interview grammar tests for which I panicked and second-guessed my spelling more than I did on the SATs. I was once rejected from an exciting opening just 24 minutes after I applied, despite a personal connection and my most customized cover letter to date. On a summer Thursday, I eagerly scheduled an interview for Monday only to have it canceled on Friday afternoon because the company had hired the girl who interviewed Friday morning.

My search could have been much worse, much more soul-crushing demon bosses. But that one offer is all you need. And it’s true that every interview, no matter how awful, is practice for the next one. It’s true that the companies that don’t find you suitable enough are the ones that might not have been good fits for you anyway. It’s true that this whole process is about the vagaries of timing and the strength of personal connections, two things often out of your control.

But you do have some agency in the agony, I swear! Here, in the To-Do List form with which I became well accustomed as I was sending feelers into the ether, are five steps you can take that might help stem the insomnia-instigating fear that you’ll end up having to work as the guy who dresses up as Elmo in Times Square. (Though to be fair, I hear that gig has the sweet perk of “built-in sauna included.”)

Be realistic in realizing that you’re caught in a numbers game, but don’t sell yourself short. Your first job is by no means your lifetime career, and the stability of office life may have its downsides anyway, but it is feasible, with all due effort and endurance, to land a job you’re proud of in an industry you love. So take heart, and Godspeed.

Editor’s Note: There’s a happy ending to this one — the writer was offered a full-time position with the company starting March 18th. She excitedly accepted.