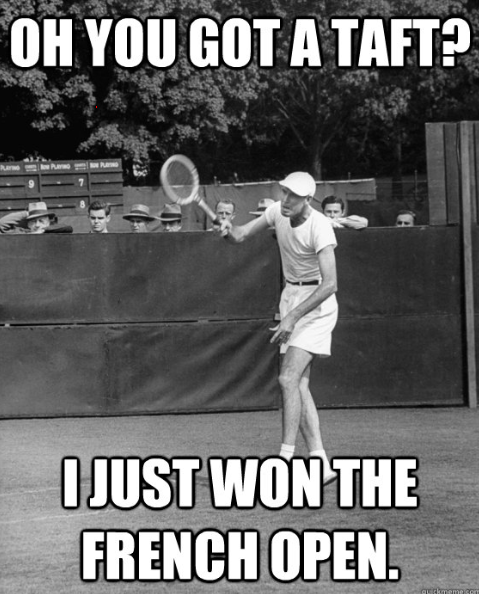 So Kenyon is a college that prides itself on its chip-on-the-shoulder, small school attitude. One of the best parts about that is that we have a pretty amazing alumni base that can A) get you some pretty sweet jobs, or B) give you something awesome to brag about. Did you hear Alison Janney went here? Yeah C.J. Cregg, Bill Watterson, Rutherford B. Hayes, Paul Newman, even Kluge for Christ’s sake. But what about other great graduates? Wikipedia maintains a pretty long list, so let’s check out some other brag-worthy alumni.

1) Rolla Dyer — Here’s a question for you. Who was the last friend you had that died from typhus (I think that’s the one from Oregon Trail)? Exactly, you can thank Rolla for that one. Kenyon Alumni: 1; typhus: 0.  [Ed: It’s typhoid you’re thinking of. Also two of your oxen died while fording the river.]

2) Saskia Hamilton — Giving hope to writers of poetry across the campus, Hamilton has snagged a plethora of awards, notably Guggenheim and NEA Fellowships. She even collaborated with Ben Folds and Nick Hornby on their album Lonely Avenue. Check out track 10 entitled … wait for it … “Saskia Hamilton.”

3) Don McNeill — As a junior at Kenyon, I really feel like I’ve accomplished a lot. McNeill takes being a junior to the next level, having won the French Open in 1939, oh, just a year before he graduated. Ho hum. I guess it’s pretty cool that he picked up U.S. Open title a couple of months later.

4) Jonathan Mannion — We posted on Mannion a few weeks ago but, in case you weren’t paying attention: he is awesome. Ever pick up a copy of Reasonable Doubt or The Eminem Show? Welp, Mannion shot the covers. You know, just rubbing elbows with a couple of rap moguls.

5) Laura Hillenbrand — While she never graduated from Kenyon (we have a few notable “alums” that didn’t), Hillenbrand wrote a little book called Seabiscuit. Last I heard the story minted a cool 61 million dollars on the silver screen. What’s so special about that diploma, again?