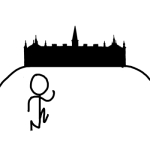 Uphill: The Deli–the Deli has added a new menu item: the Pepperoni Pretzel. By far the cheapest meal on the menu, and probably pretty tasty if it is what I think it is. At $5.50, it’s not too bad for a place that’s usually a little pricey.

Downhill: Ladles– Peirce has decide to remove the BBQ sauce trough in favor a BBQ sauce pump machine. This I don’t like. Can’t put my finger on why (yet), but it just doesn’t seem as genuine or good as the trough. Until then, consider me to be on a BBQ-boycott.