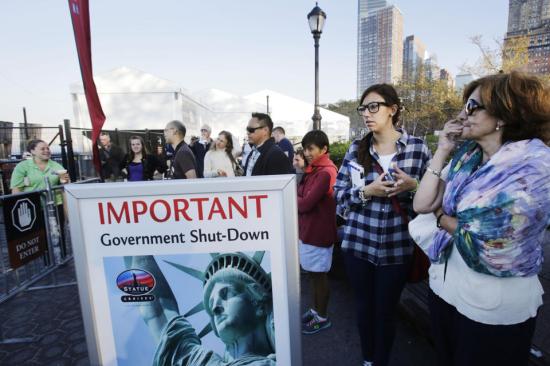 These people are not going to visit the Statue of Liberty. Thanks, Obama.

The Lead Story: As you all know, the government is still shutdown. This conflict stems from the Republican-controlled House’s inability to pass a “clean” continuing resolution. A continuing resolution, or CR, is like a budget for when Congress can’t pass a budget (it hasn’t in three years because our legislature is controlled by opposing parties and it takes 60 votes for the Senate to pass a budget without House consent).

When politicians talk about a “clean” CR, they mean one that does not defund the Affordable Care Act, AKA Obamacare. Both sides are dug in at this point. Obama has said he won’t sign a CR that defunds Obamacare and the House Republican leadership has demanded concessions from the White House before agreeing to reopen the government or raise the debt ceiling, the amount Congress is allowed to borrow to pay its debts.

Other than in the news, you’re unlikely to hear much about the shutdown. Knox County won’t be affected much.

US Special Forces conducted raids in Somalia and Libya over the weekend. In the latter operation commandos captured an Al-Qaeda leader allegedly responsible for the infamous 1998 attack on the US embassy in Nairobi, Kenya. Libya seems to have been kept out of the loop and is calling the whole thing a “kidnapping.”

A monster truck crashed into spectators at a Mexican air show on Saturday, killing eight and leaving dozens injured.

The US Treasury will release a new $100 bill on Tuesday, after years of delays. Each bill has a serial number on it and some of the first ones off the line (e.g. #000000000001) will be worth thousands to collectors

The Long Read: Found that embarrassing mug shot online? Don’t worry, you can have it taken down, for a price.

The Weather: Other than showers today, this week will be a pleasant one. Reading days will probably be gorgeous, with lots of sun and highs around 70.