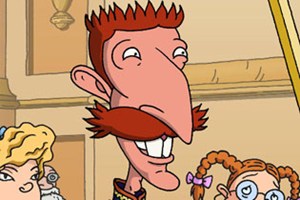 Kenyon is a small campus in a tiny town, which may lead students to quickly feel like they’ve seen everything there is to see on the Hill. Here to shatter that comfortable illusion is the Kenyon Explorer! This week, I put on my trusty pith helmet and headed into the bush to find study spaces off the beaten path.

I began my explorations with the English houses. After a disappointing start in Lentz, I wandered into Bailey and discovered it’s magical wonderland of a second floor. Bailey House doesn’t seem to have any tables outside of its classrooms, but the stairwell *does* possess this extra-wide window seat with great view of the woods and easy access to a truly lovely full bathroom.

Pro: View to make you forget how much reading you need to do; close to what may be the best bathroom on campus, complete with a shower in case your reading gets super-steamy.

My travels next took me to the Squad, where my puny Humanities-major mind was sufficiently blown when I went into the basement of Hayes, wandered through a hall I hadn’t encountered before… and found myself in Tomsich. That’s right, fellow non-sciencey people – THE SCIENCE QUAD IS ONE GIANT BUILDING CONNECTED BY UNDERGROUND HALLWAYS.

Sciencey people – hush. This was a really big, exciting deal to me.

I also discovered several nice, quiet little corners with tables and chairs, perfect for secluding yourself with your books. I particularly liked this one, close to several vending machines. 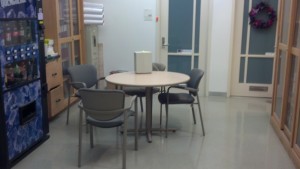 After snapping a few photos in the basement of Tomsiglayes (petition to rename the Squad to reflect its true nature to follow), I recruited a Drama major to show me around the Magical World of the Hill Theater. There, I encountered not one, but two potential study havens.

The first is this reading room, nestled above the theater, outside Wendy MacLeod’s office. As with the Bailey windowsill, it offers no tables, but does provide a plethora of comfy chairs.

And this couch. (Drama major only sometimes included.)

Pro: Comfy chairs; lots of plays with which to distract yourself; feel of secret childhood hideout pervasive.

If you take the stairs in the opposite direction, you’ll arrive in the basement below the theater and encounter this gem of a study table. With plenty of workspace, a provided desk lamp, and chairs with arms on them (a rarity), this secluded spot has some real potential. 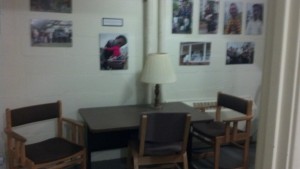 Pro: Well off the beaten path and comfortable; far enough from faculty offices to limit disturbances.

Con: The pictures. Oh god, the pictures. They’re fairly unclear in this photo, but holy hell. If you’re into giant, disproportionate puppets, they’ll be right up your alley – otherwise, be prepared for some nightmares.

My excursion also took me on a brief survey of the far reaches of Olin, including the microfilm shelves. I wasn’t expecting much, but I did run across this: