There are certain clothes that we associate with college life: cardigans, khaki, plaid, tweed, and many other “preppy” or “Ivy” fashion pieces. However, in recent years, students have begun combining these classic pieces with their modern favorites. As an addition to the Kenyon Sartorialist, we are featuring some of the best collegiate looks of the past week.

Up first is Emma Brown, looking the picture of a ‘50s college coed in her cardigan, button down shirt, and red coat replete with toggle closures. She claimed that the fall colors had almost inspired her to take the day in all red, but we agreed that the blacks and whites were great complements and classed up her outfit.

I found Joel Seltzer in the library on Monday. He claims that this outfit was assembled by a friend who attends FIT and his style is “whatever is in my closet” but “sort of hipster,” though his khakis and moss green button-down sweater show that the boy can pull off (even if he can’t pick out) an outfit that looks straight outta Lisa Birnbach. But his comment about hipsters stresses the relationship between the khakis and tweed of the hipsters to the, admittedly much looser, khaki and tweed of the preps. 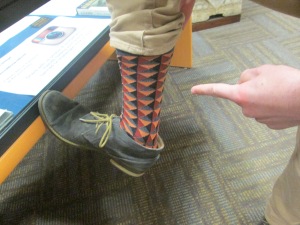 Suede chukka boots complete the collegiate look and check out those socks! 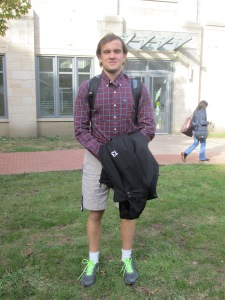 Noah Gurzenski presents an interesting spin on the classic WASP look. In what I call “neo-prep” Noah pairs classic WASP plaid and khaki with some of the brightest sneakers I’ve ever seen, true contemporary pieces. 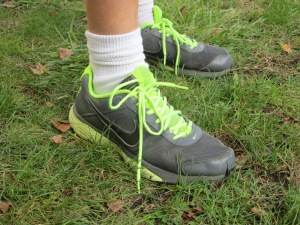 Describing his style as “classy, but functional,” Noah is the picture of a modern student. He’s able to draw on the dressed-up classics, but pairing them with the functionality of today’s options.

Hannah Zipperman describes her outfit as “a hobo from the ‘90s meets an activist from the ‘60s.” Her red plaid dress matches nicely with both her camel sweater and grey knee-socks. This is an outfit that exemplifies a youthful collegiate look, but her thick black boots show a cross between her ‘60s inspired preppy plaid and a more punk look (perhaps the ‘90s influence? But hey these two looks might be fairly similar). The boots only reinforce the idea  that today’s “college look” knows no one decade.