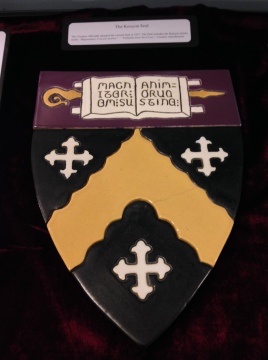 Haven’t made it into Olin’s Greenslade Special Collections and Archives to check out their exhibit on Kenyon inaugurations through the years? At this point, with the campus gearing up for Saturday’s festivities, it might be too late to see some of the items as they are pressed into service for the first time in a decade. However, the curators of the exhibit, Nina Whittaker ’16 and Muhammed Asad Hansrod ’17, talked me through the exhibit as I took crappy iPhone photos that are more or less as good as seeing the real thing. 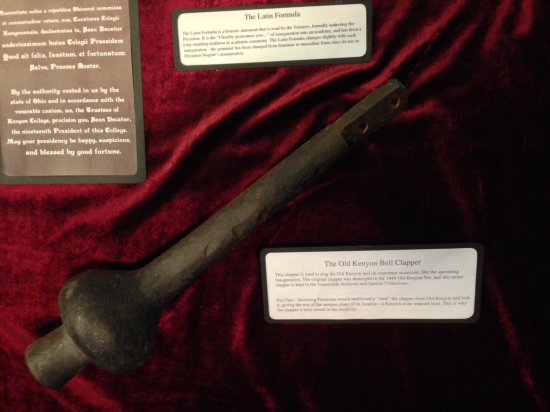 This hunk of metal, which will be used to ring in President Decatur at the Illumination on Saturday night, used to live in the Old Kenyon steeple, but was relocated to the archives after the longstanding College tradition of climbing Old Kenyon to steal it became too much of a safety hazard. Due to the famous fire of 1949, neither the bell nor the clapper are original. These days, the bell is only used for inaugurations, but in years past the bell was rung for many occasions — including when sports teams won games, and to signal the time. The latter function, has, of course, been taken up by the bells in the Church of the Holy Spirit. 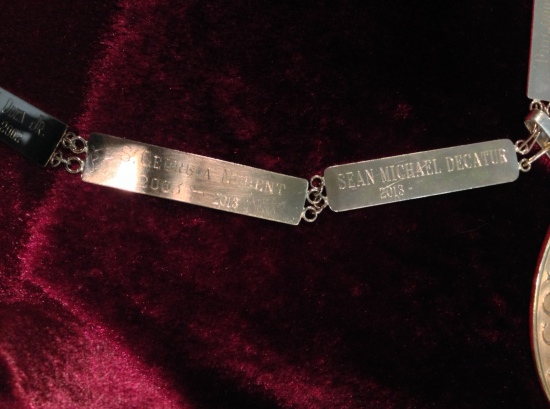 These two links form the most recent sections of the presidential medallion. By 2003, when President Nugent was inaugurated, the chain was already long enough that the Nuge had to MacGyver a system to keep it suspended and not hanging practically to the ground. President Decatur, who is somewhat taller, will hopefully not have that problem. His link was constructed and engraved by a local Mount Vernon jeweler.

A visit to the Archives will also help demystify the funny-looking robes faculty wear at formal events. Both the color and number of stripes on the sleeves are symbolic. One stripe represents a bachelor’s degree; two, a master’s; and three, a doctorate. President Nugent’s robes carried a fourth stripe, to denote a college president; for reasons that are unclear, President Decatur’s robes currently only carry three stripes. The color of the stripes represents one’s academic speciality. For example, Doc Locke, as a professor of music, wears pink stripes. Econ professors wear copper, philosophy and politics are dark blue, the sciences are gold, and fine arts are brown, just to give a few examples.

Want to learn some Latin? (No.) On Saturday, the following oath will be read to at the installation ceremony.

By the authority vested in us by the state of Ohio and in accordance with the venerable custom, we, the Trustees of Kenyon College, proclaim you, Sean Decatur, the nineteenth President of the College. May your presidency be happy, auspicious, and blessed by good fortune.