We have to make a confession. The Thrill prides itself on its opinions. We have previously stated that we are anti-Josh Radnor, and in that same light, we LOVE Gwyneth Paltrow. For those of you who don’t already know, Gwen has a lifestyle blog called Goop where she just basically talks about her life and her daily struggles as an actress and all-around famous person. During one of our forays on Goop, we discovered that Gwyneth typically does 3-5 master cleanses a year to keep her spirit balanced and to look like a badass. Editors Spencer Kaye ’14 and Izzy Sanderson ’15 thought the idea sounded a little bit too amazing to pass up. Read on to experience our adventures with the master cleanse:

Spencer: I have always wanted to challenge myself physically, so when I heard that Gwyneth Paltrow was a proponent of the Lemonade Master Cleanse, I knew that I had to give it a shot. How did you feel when I suggested it?

Izzy: I like to participate in anything that I think will crush Spencer physically and/or mentally. So I was in. Didn’t even have to think.

Spencer: The first obstacle that we had to overcome was actually getting the necessary supplies. Including a 6-time daily drink of lemon juice, water, cayenne pepper and Grade-B maple syrup.

Izzy: Spencer of course was broke…so I financed the trip. We couldn’t find Grade-B…so we settled for Grade-A maple syrup. We like to take risks. Did it hurt us in the long run? We will never know.

Spencer: Initially I was a little hesitant about buying the Grade-A after multiple friends told me that I wouldn’t get the necessary nutrients without Grade-B, but like Izzy said, we pressed on like Ernest Shackleton.

Izzy: We had our last meal in Peirce…Honestly, my meal was slightly disappointing. I was hoping for something more decadent–a fancy meal that I imagine Gwyneth indulging in before all of her cleanses.

Spencer: That was the worst sausage sandwich I’ve ever had; seriously, I was glad to give up food for a few days.

Izzy: We started just after dinner. Our goal was to do the cleanse for three days (okay, maybe five days). Gwyneth does hers for ten days.

Spencer: I think that since we didn’t do the full ten, the pre-cleanse diet (you are supposed to slowly phase out all foods) wasn’t necessary…also like Izzy said, I’m broke. 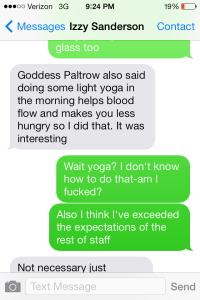 Izzy: I woke up on Monday morning ready to go. I had my personalized water bottle and my ingredients and just went for it. Spencer had already had his “breakfast.” So I was prepared for the cayenne kick.

Spencer: The first “meal” was a little light to say the least. I had two before I went to class, my goal was to drink anywhere between 9-12 glasses a day with almost unlimited water. I decided that the way to success was to pre-make a lot of my juices, big mistake apparently, our Lord and Savior Gwyneth says that it doesn’t “take” if you pre-mix so I will blame my failure partly on that. 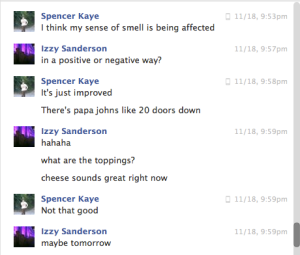 Izzy: I was not as aspirational as Spence. I had like three bottles a day. The first day wasn’t that bad. I felt pretty spiritually clean…that is the goal right? Gwyneth is never super clear about what the end game is supposed be. I had a rough time concentrating on work though…probably because I was too busy growing spiritually.

Spencer: I think it was only on Tuesday that I was starting to feel a little “off.” I was surprisingly not hungry at all for the first 36 hours, I really couldn’t believe it, but I was basically tripping balls on how low my blood sugar was. Definitely not enough nutrition for a growing young adult in a teaspoon of lemon juice and a little maple syrup.

Izzy: I was surprised at how well you did too. You thrived for a few good hours. I was a bit shocked. Day two was a different story. Woke up feeling fine. But then the craving starting hitting me. I was obsessed with peanut butter. It was unbearable. Then the weirder symptoms started, like the fact that my feet felt physically smaller.

Spencer: I would say it was about 3PM, 45 hours in, that I just knew that I wouldn’t be able to go another day of it. I was laying in bed, barely able to hold on to my phone, my grip was so weak. I think I might have been able to go on a lot longer if someone else was actually making the drinks, the shaking motion was too calorically taxing for me by hour 48. Just out-of-this-world hard.

Izzy: True. Gwen probably has assistants or all the members of Coldplay making her drinks for her. We were lacking in that department. I knew it was time to stop when I got a text from Spencer saying something along the lines of, “I can’t go on. My spirit is feeling weak.” I also felt weak. I remember sitting in film class, watching Taxi Driver and there was a scene where the main character eats apple pie…I started physically shaking. It was all too much.

Spencer: Like I said, I could’ve gone the full ten days, I just didn’t want to do too much, too fast. Also I’m weak willed (to my future employers, that was a lie I told Izzy to make her feel better, I’m not weak-willed at all). 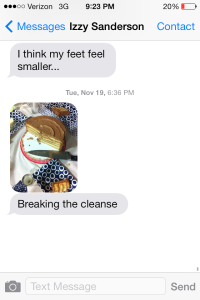 Izzy: We can pretend that is true. I could have gone for days. I heard that around day seven the hallucinations start. I would have been beast at that level. I was just worried about Spencer. He has a lot of limitations.

Spencer: Would you do it again?

Spencer: Neither would I.

Izzy: Sorry, Gwyneth. We failed you.