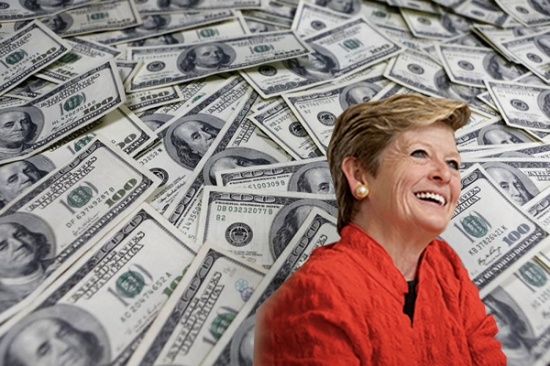 S. Georgia Nugent was the 20th highest-paid college president in 2011.

As you might suspect, college presidents make big bucks in exchange for calling the shots (and fundraising) at campuses nationwide. At private schools, the president is commonly the highest paid employee. At public schools, it’s usually the football coach.

But Kenyon’s former President S. Georgia Nugent put the College back in the spotlight on Monday when she made The Chronicle of Higher Education‘s list of the top twenty highest-paid private college presidents in 2011, pulling in nearly $1.3 million. That’s a 147% raise from what she made in 2010. What gives, Kenyon?

Now, you’re probably wondering what that “Other pay” is (hush money? Super-PAC money? A lifetime supply of Cove mac & cheese wedges?!). It’s vested deferred compensation, or money set aside for an employee in previous years that was paid out in the current year. In this context, vested essentially means paid out.

Kenyon’s 2011 990 Form, a financial disclosure non-profits are required to submit to the IRS, mentions this vested deferred pay:

[Nugent’s] form W-2 for calendar year 2011 included 758,739 of vested deferred compensation, $550,000 of which had been reported on prior years’ Forms 990 [ed. note: like attorneys general] when the compensation was not yet vested. These payments were approved by the Board of Trustees who were independent of Dr. Nugent.

Deferred pay isn’t witchcraft. Many industries (finance, technology, professional sports) use it to incentivize their employees to stay put or meet certain goals laid out in a contract.

Director of Public Affairs Mark Ellis confirmed to The Thrill that contracts like former President Nugent’s are “used to reward” and as a “retention tool.”

Ellis denied that the timing of Nugent’s compensation had anything to do with the We Are Kenyon campaign, a fundraising drive completed in 2011 that brought over $240 million into the College’s coffers (the campaign’s goal was $230 million).

Public Affairs also released a statement in response to the Chronicle‘s report:

A one-year spike in deferred compensation for the former president of Kenyon College accounts for a temporary jump up the pay ranks reported Sunday by the Chronicle of Higher Education.

“We believe the compensation for our president is competitive, appropriate, and well in line with our peer institutions,” said Barry F. Schwartz ’70, chairman of the board of trustees.

So Nugent’s compensation package was a one-year spike. A “common and important” aberration.

Another article from the Chronicle sheds some light:

Deferred-compensation plans are common for college presidents. For the highest-paid leaders, a board may allocate hundreds of thousands of dollars a year in deferred compensation, which can be invested tax free until the time of the payout.

Does this seem like something a non-profit should be doing?