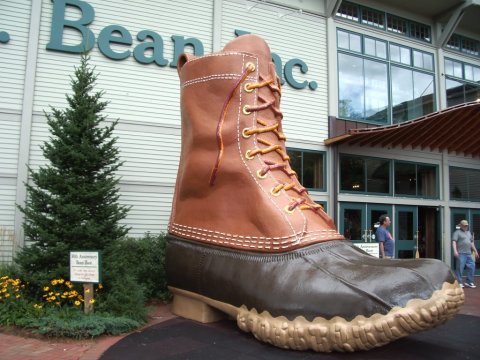 From Boots by Rudyard Kipling

Kenyon students are definitely boot wearers (though we aren’t imperialists like Mr. Kipling). The snow, the mud, and our coolness factor all necessitate the use of boots. But in the wintertime we fall into two camps: those who wear snow boots and those who wear regular, uninsulated, boots.

Coming from a cold climate, I am perfectly fine in my uninsulated L.L. Bean boots, and I am not alone. Despite the recent cold snap, I have still seen far more pairs of uninsulated boots on the feet of Kenyon students. I have a few theories as to why this might be.

First off most Kenyon students are from the Northeast, so we’re used to the cold and don’t need those silly boot liners.

All of those Kenyon students wearing insulated boots are taking some outdoor class that I don’t know about. Because seriously, nothing on campus is that long of a walk in the cold.

The cold, cracked leather boots we bought at the Goodwill are much better looking and help us identify with the characters in that Russian novel we’re reading.

Some people actually care about the comfort of their feet. As a child I walked to school uphill both ways in sub-zero weather (true story), so I sometimes forget that other children rode in warm busses and cars to school. I don’t regret building the character though.

Insulated boots are so damn expensive! Let’s face it, buying several extra pairs of Smartwool socks is a much cheaper alternative to buying boots that can really only be worn in one season.

We get to brag to our friends at warmer schools that we’re building character by toughing out the winter in our uninsulated boots (and posting iPhone weather screenshots of the -22 weather).

These are just my speculations, sound off in the comments on what boots you where and why!