The secrets of the universe lie beyond these doors (but actually yeah, math is pretty important)

Deep within the recesses of Rutherford B. Hayes Hall lie two rooms, secret but to a few select members of the Kenyon community. From the insides come the low whir of computers, the soft tapping of calculator keys, and the scratch of pen on paper. You reach the doors, scared of what lies beyond only to be stopped dead in your tracks by a locked door and a sign reading “This Space is Reserved for Math Majors Only.”

The  first stop was the mathematics library. Unsurprisngly there were fewer books than we might find in other libraries, in fact aside from a whiteboard and portraits of famous mathematicians, the room seemed rather devoid of “mathy” things.

My guide did tell me that this room was not used by very many math majors due to its lack of computers. I thought it seemed like a rather nice place to study, there weren’t even any large and heavy math textbooks to scare me away. 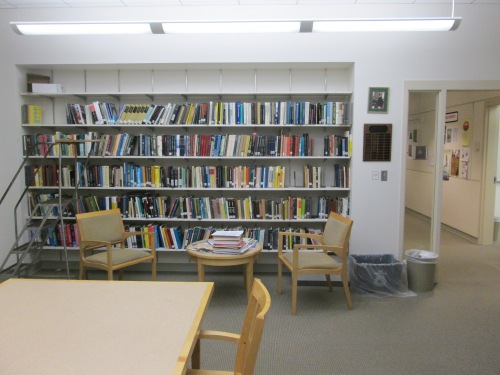 My next stop was the “Starr Computer Lab.” This, from what I understand, is the heart of the Kenyon math world. Math  majors, who need computers to do much of their work, flock here for the swivel chairs, math computer programs and private printer (almost worth being a math major for this).

But from what I could tell the best part about the secret rooms was not the privacy, the exclusivity, or the unfettered access to computers and printing, but the FOOD. Yes, my guide told me that the computer lab was usually stocked with food for the math majors. Perhaps they’re too busy to leave for Peirce, or maybe they’ve been told of hordes of roving humanities majors eager to seize funding from STEM. Though I don’t think it really matters, just remember kids, become a math major, get a well-stocked larder for a study room.

Overall I’d call the exploration a success. I got a look into secret places. Learned a little bit more about the life of a math major. And renewed my commitment to my Data Analysis course; if I just keep my eye on the prize, I too can have access to these private rooms, but mostly to food.