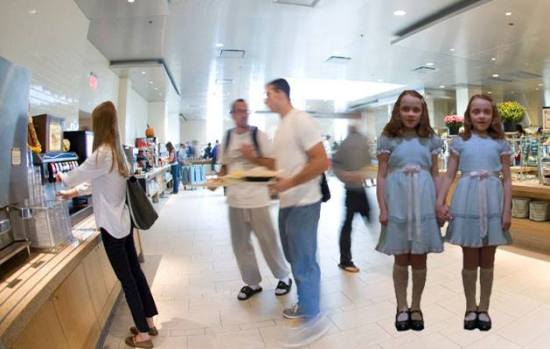 At first she was just a shadow on the other side of the servery, a blip in the corner of my eye in Ascension. I thought I was seeing things. But it got weirder: people telling me I had conversations with them in places I had never been, professors saying that I had come to their office hours when I had been in other classes, people tagging me in photos at parties that I hadn’t attended. I thought I was going insane. That was, until a writer for The Thrill contacted me.

“Yeah,” she said to me. “You guys look really similar. It’s almost uncanny. Can we do a doppelgangers feature on the two of you?” I agreed.

I was never interested in myths. Ghost stories bored me and I never believed in fairy tales. But before meeting my doppelganger for our article, I looked up what a doppelganger meant. Some sources say it’s just uncanny coincidence. Scientists say that it’s electrical stimulation in your brain. But some say that a doppelganger is an omen of death, or that they, themselves, want to take your life. As I said, I usually don’t believe in myths. But after I shut my laptop and packed my things to meet my doppelganger, I was filled with dread.

We met in Peirce Atrium, she and I. The writer asked us our names. They were the same. Our majors? Minors? Concentrations? We said “Neuroscience, minor in Studio Art” completely in sync.

After finishing our brief interview and snapping a few pictures, I began walking to the first-floor women’s restroom. She was close at my heels. Assuring myself that she, like me, just needed to pee, I ignored her until we got inside. I stopped to look at myself in the mirror. I saw her glaring at my reflection behind me. “What do you want?” I asked, trying to keep my voice from shaking.

She said nothing, just stared.

I spun around on my heel and took a step forward. But I stepped into a puddle of water and my foot slipped. I fell and hit my head. The last thing I could hear before everything went dark was her voice coldly telling me, “I’m here to warn you.”