March 19, 2014 By Becca Hafter in Features Tags: employment, please god let the job search be over before I'm 35, the company 4 Comments 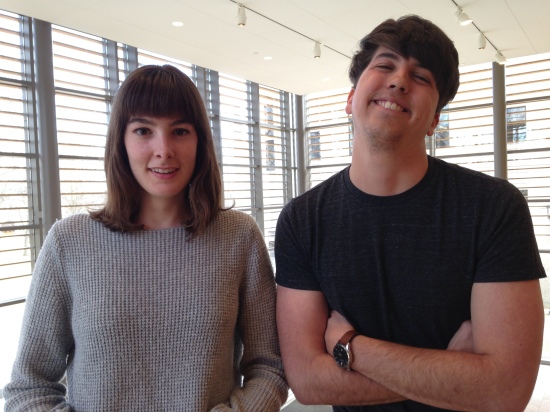 Looking for a job is, in itself, a full-time job. Ask any college senior. But for Hary Bollyman ’14 and Jalex Aordan ’14, both English majors, the search is over.

“We are not unemployed,” Mollyman reported. “I’ve had a job all year.”

Aordon chimed in, saying, “Yeah, everyone thinks English majors have no career prospects, but they’re wrong!”

Both  have accepted careers with the best Company at Kenyon. Snagging such high prestige positions with the notoriously ruthless Company was no cakewalk. Over their four years at Kenyon, Mollyman and Aordon have spent countless days making connections with like-minded Professors and Company associates.

“Contact Improv was a vital step in our job-search process. You just reach out your limbs as far as they can go and hope you make full body contact with somebody–professor, Oberlin student, football player, anyone–the key is making contact. I’ve made a lot of high-impact Kenyon connections”

In the fall, Mollyman and Aordan discovered they would be auditioning together during the “very fun musical comedy dress up day” of interviews at Company headquarters.

“We were totally collaborative the entire time, which was great,” said Aordan. “Hary wasn’t that cooperative at first, but after we made contact for five or six minutes our vibes matched up and our audition went perfectly. Then the Company offered us jobs!”

While both said their job performance at the Company has been well reviewed (see this very publication), they grew defensive when asked about their Company salaries and healthcare plans.

“If there’s anything our English major as taught us, it’s that only literature matters,” said Aordan.

So sweet, so true. Their Company should be lucky to have them.

See, Class of 2014, finding a satisfying position with a company isn’t so hard! Go make connections. Now we’re at like, what, four Kenyon seniors with jobs? Only 400-ish to follow.