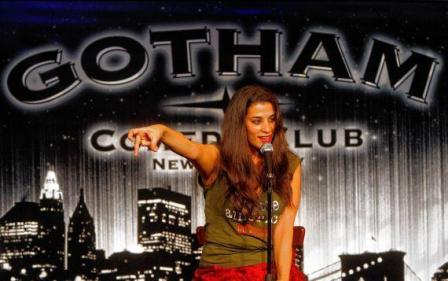 Actress, comedian, and activist Maysoon Zayid visited campus last week to perform a comedy routine called “I got 99 problems … palsy is just one.” Zayid is the co-founder and co-executive producer of the New York Arab American Comedy Festival, and runs the scholarship and wellness program, Maysoon’s Kids. Zayid, who has cerebral palsy, also participated in a discussion about race, ethnicity and disability before her show. Below are some of her thoughts from an interview conducted by Collegian News Editor Madeleine Thompson ’15.

Do you think comedy is the best way to get the word out about protecting the rights of the disabled community?

I really truly am not trying to spread a message. I’m a writer and I’m a comic so it all comes back to writing. … I’ve been writing for my entire life and the story I’m telling is my story. And I think that I’m strongest at doing comedy, so I guess it’s my preferred method, but I don’t think it’s necessarily the best method. … I think [spoken word] is the worst way to mainstream the disabled. That would make me just hate our people.

Is there one group in particular that you wish you could reach?

Well I’ve always wanted to be on “General Hospital,” which sounds crazy but there’s a really good reason for it. … I think that daytime television is a fantasy world. It’s an escape. And if we could get a disabled character who can’t be healed to be mainstreamed in this fantasy world … it would be a huge step forward for our community as far as having mainstream representation. … My second choice would be a talk show. I think it’s absolutely ridiculous that “The View” has had every single minority and never had someone with a disability.

What do you think the disabled community could do better to fight for their rights?

As a community we lack unity because there’s so much diversity, and we haven’t fought for a unified message about the way we’re portrayed in media and the lack of representation. I think that there’s fear and weakness in our community, so often a disabled person would rather be played by Jamie Foxx than by someone with a disability. … We have dissent within our community about our ability of what we can and can’t achieve.

How can colleges and college students be more aware and help accommodate their fellow students who are disabled? What can be done better?

[W]hen people try to integrate the disabled it’s like, “Ok, we’re going to give you a buddy!” … I don’t think they’re treated as equals. I don’t think the efforts are made to integrate them without it being like, “So Becky, we built you a ramp, but now you can only take these classes in this building.” I don’t think anything is being done to make them truly feel like equals, and I think that it’s still acceptable to treat disabled students as others, where it’s not acceptable to do it to any other community. I think that professors have to be made aware that part of their office hours might be a student coming in and saying, “I can’t test the way other people test, [so] how are we going to test?” … It’s about integrating people without embarrassing them.

What do you hope college students learn/get out of your show?

I want college students to wake up and understand that the United States of America is disappearing their rights and they need to do something about it. Nothing to do with disability, nothing to do with being Palestinian, it all comes back to being an American from New Jersey. We live in a year, day and age where our president has taken away our right to trial, and I don’t hear anyone complaining about it. So I need you guys to wake up and see that your basic human rights are being disappeared and that you have the ability to stop this from happening and change it.

This interview has been edited for length and clarity.