On Friday, we published a letter from Kenyon alumna Sue Corral ’93, imploring current Kenyon students to support the efforts of Venezuelan political prisoner Leopoldo López ’93. Now, Corral is sharing an interview conducted by Roberto Giusti with López in his jail cell, originally published in El Universal, Caracas — read it in full below. 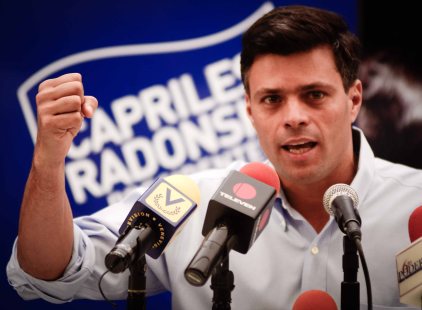 “In the solitude of my cell, innocence is my best companion.”

“Those who think that the regime is falling or faltering because of the economic situation are wrong…I assume responsibility for calling people to the streets. If necessary, I would do it again,” said Lopez.

Sue Corral ’93 was kind enough to give us a copy of this interview with Leopoldo López ’93 from his prison cell in Venezuela on March 16th, translated by Antonio Sarmiento at Marabotto Translations. The interview is transcribed after the jump:

With a steady, neat and determined hand (and very few corrections), Leopoldo López — beyond other things — writes of someone who maintains the firmness of his convictions. With limited communication with the outside world (at least from the inside going out), except through the trusty standby of pencil and paper, he uses these tools which in today’s Venezuela are no longer an anachronism, though we might have they had gone out of style some time ago. Deprived of the usual means available to other, Leopoldo uses ink and a blank page (which are available to him) to answer a thirteen-question interview, after almost a month of captivity, from his narrow, isolated military prison cell at Ramo Verde, in Los Teques.

But it is not the same to answer questions with the consecutive flow of a verbal interview, face-to-face and in freedom, than to do so as a prisoner subjected to punishment and great uncertainty. However, one thing lacking in freedom and plentiful in jail is time. For that reason, the papers we received come from a more thoughtful and concise Leopoldo, though as vehement and determined as when he walked the streets.

How do you kill your time considering that you are subjected to relative isolation?

I don’t kill time in jail. I take advantage of it. I decided to make my imprisonment an opportunity. I have developed a routine that begins every day at 6:00 in the morning, reading the Word of the Day. Then, from 6:30 to 8:00 a.m., I exercise, work out, have breakfast and complete my first block of history reading. In the afternoon I write and dedicate a second block of reading to economics, with an emphasis on issues of petroleum, as well as literature. Before dinner I work out again and review all the newspapers I can get. I try to be very disciplined because I’m aware that my main battlefield, being in prison, is my mind and spirit.

Have you got anything positive out of your imprisonment?

During my first days (in prison) I received a note from Iván Simonovis, who I was not permitted to see, due to the isolation to which I am subjected, even though our cells are separated by only nine meters (30 ft.). This note from Iván read:

“The days are long, the minutes become hours, and that’s when you must demonstrate your self-discipline. Always keep your head up. In prison you build courage every day.”

These words have inspired me, and I have strengthened my self-discipline.

Do you have access to information? Do you know fully what is happening in the streets? Do you read newspapers, watch TV, listen to the radio, have access to the Internet?

I can read newspapers, though each day there are fewer pages. Recently, I had access to a TV, although the only thing you see about Venezuela is government propaganda and fiction. These are the limitations imposed by the agony of freedom of expression.

What do you miss most about the outside world?

Being with Lilian and my children, Leopoldo and Manuela, at home. I also miss my comrades with whom I haven’t been able to speak due to the limitations imposed on visits.

Has prison changed your perception of reality?

Rather, I now know another dimension of reality: that of a prisoner.

Were you wrong to assume that your imprisonment would be brief, believing that the protest you promoted would lead to a speedy release?

I didn’t calculate the time correctly. I did the right thing, that which my conscience, my convictions and my fighting spirit for Venezuela told me to do. I’m in prison because I decided to be. Despite the fact that I was sought by all the security forces, they didn’t capture me and weren’t going to capture me. I turned myself in and faced my country, despite having been accused of crimes I didn’t commit. The other options I had —exile or living underground— would have been as much a prison for me.

Aren’t you afraid that your imprisonment may last much longer than you imagined?

I’m prepared (physically, mentally, spiritually and in terms of my family) to be in jail for so long as is God’s will. In the solitude of my cell, my innocence is my best companion.

Wasn’t your call for street protests a miscalculation?

On the contrary. Perhaps we should have done it before. The massive and peaceful response of hundreds of thousands of Venezuelans in the streets for a month (and I’m sure this will continue) has proven us right. The people are outraged and they have no other option. The regime has closed all other doors. Those who thought and still think that the regime is falling (or was falling) by itself and is faltering (or was faltering) because of the economic situation, are wrong. Let’s look at ourselves in the mirror of Cuba. How much longer would we wait? Fifty years? It’s been fifteen already.

Maduro accuses you of being the figurehead of a coup d’état that failed. What’s your response to that?

The blow to the democracy, welfare and security of the Venezuelan people was and is still given by Maduro. That is the real and ongoing coup that we’re experiencing. I assume responsibility for having called for a non-violent protest in the streets. If necessary, I would do it again.

When considering the consequences of this long month of protests, was it worth the toll of people killed, injured, arrested and tortured?

There is never any justification for killing, injuring, torturing, and arresting people. I’m truly pained by the sacrifice of our people, of all who have suffered, the descamisados (shirtless/supporters) and uniformed officials. But we can’t forget that the main responsibility lies with Maduro. This is demonstrated by the evidence: pictures, videos and testimonies.

Wasn’t it necessary —as Henrique Capriles claimed— to first build a majority and focus the strategy on the real issues rather than on a message of “Get Out, Maduro”?

We who want change are a majority. This was demonstrated on April 14, and it was Henrique himself who denounced the electoral fraud committed that day, when he claimed (and we supported him) that the election was stolen from him. But it is clear that our proposal for La Salida (The Way Out — 2014 Venezuelan protests) remains, through which we do nothing more than resort to a constitutional, popular and democratic solution for the disaster to which Maduro has led us. Today, more than ever, we are obligated to find a way out, as all democratic sectors have already recognized, including Henrique, to whom I send a warm greeting in our struggle for Venezuela.

The Government has called for dialogue, which has been heeded by some sectors, especially businesspeople.

I believe in a dialogue that allows us to make progress towards a way out. I don’t believe in a theatrical dialogue, which serves only as a façade to stabilize the corrupt, inefficient and undemocratic regime of Maduro.

How do you feel about the support offered by the Democratic Unity Roundtable in these circumstances?
Their support has been strong for all of us who are political prisoners. So it was announced this week by the [Democratic Unity] Roundtable and the mayors, as the first condition for a dialogue with the regime.

To what extent do the examples given by Rómulo Betancourt, Rafael Caldera and Jóvito Villalba (and many others) offer models to be followed, in that they set aside their circumstantial political differences to achieve a unity of purpose in the establishing of a democratic system?

Undoubtedly, they offer examples to follow. I’m a scholar of our history, and I think that the period most similar to the present is that from 1952 to 1958. From the 1952 electoral fraud, which removed the mask from the Perez Jimenez dictatorship, through the overthrow of that dictatorship. In that part of our history there are many heroes who, like today, suffered persecution, torture, imprisonment and exile, but with their perseverance and strength they won their dream of a free and democratic Venezuela. In that spirit, I take this opportunity to extend a greeting to the heroes who have not given up their fight, to the families of the victims and to my brothers, Carlos Vecchio and Antonio Rivero, who remain in hiding, persecuted by the regime.