What’s up, humanities nerds! I’m here to come drop some hard science on your asses! The silent majority is now rising; biologists, chemists, physicists, [Ed: and mathematicians] STAND UP!  It’s time to take our talents to Gambier. You ain’t never seen anything like this. It’s time we put ourselves at the front of your lecture halls and show you our interpretations. Get buckled in, because I’m about to show you what these sculptures really mean. 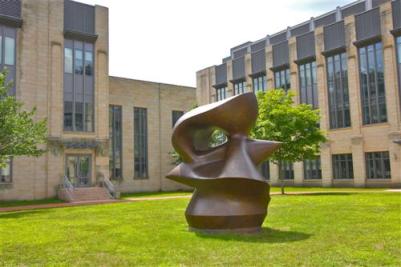 First up: this thingamajig. Science majors know it well, and for years it’s been teasing us with the search for its deeper meaning. Scholars will tell a bunch of lies, but I’m here to tell you what it really means: The artist took inspiration from sound recordings of first semester bio lab students crying over their first graded assignments. After watching the computer printouts of the sound waves, sculptor and heartless bastard Graham VonDerween decided to place his ghastly and visually abrasive monstrosity in the middle of an otherwise beautiful circle of grass. Not only does it provocatively call to mind that time when we are all most vulnerable, but it reminds uppity seniors and prestigious alums of their utter ineptitude. VonDerween could not be reached for comment, as he is now be found in prison, after attempting to steal the intellectual property of whoever invented apples.

Beautiful artwork, or solemn reminder of past mistakes?

While it cannot be strictly referred to as “modern art” because it doesn’t totally suck, I think that this post is an important soapbox to tell the community the dark story behind these beautiful angels. It is a relatively unknown fact that Philander Chase fancied himself a bit of an amateur geneticist. Yes, before founding the College we know and love, ol’ Phil was dabbling in what we could no doubt call ethically “questionable” experiments. These supposed angels are actually some of his most horrible experiments. These freakish combinations of birds and humans are actually captives up on those pillars; hidden in plain sight. They turned on their master, and so he had them cast in bronze, and then erected to stand forever above the Hill as a reminder to all of his other pitiful creations of their master’s cruelty. Chase went on to found a school around these sculptures and demand that parents pay him money to send their children to him.