So, as it turns out Kenyon students are pretty weird. The Thrill has decided to showcase the endearing oddities of our student body with a new features entitled “Kenyon Side Projects.” In this new feature, we will spotlight a Kenyon student with a side project that we find particularly intriguing. Up first is Joe Barden ’15, political science major from Seattle. Barden unabashedly and quite expertly if I may say so, collects VHS copies of Jerry Maguire.

So Joe, tell us about the origin of your Kenyon side project.

The collection started with the website everythingisterrible.com, which is the world’s only psychedelic comedic found footage website. The website had a contest for any fledgling VHS person (someone who understands the process of collecting tapes) to send in the largest collection of Jerry Maguire tapes. My friend and I started collecting tapes to make it onto the contest board. In the midst of this competition there came a tipping point and we realized what we really should be trying to do is create the largest private collection of Jerry Maguire VHS tapes, or “Jerrys,” as they are affectionately called.

Well, the idea is not totally original. It is rooted in the fact that you can go to any place with used VHS tapes (like a thrift store or used electronic store) and there will always be several Jerry Maguire tapes. There are several theories on this basic life truth, one being that Jerry Maguire was one of the last movies to be released on VHS and therefore the DVD copy came out quickly after and overshadowed the need for VHS copies (Ed. note: Later research conducted by Joe completely debunked this theory). The tapes are also very easy to spot and visible in all stores because of their red border.

How many Jerrys do you have?

We have a few duffle bags full of them. It is hard to say exactly how many we have because they are a bit dispersed and they are displayed in a few places. I have some in my apartment, friends have some, and there are some at home. I would say we now have a number pretty close to a hundred. We also have some other VHS gems like A Video for Your Cat, which is images of things to entertain your cat and Into Airports, which is a film that shows children being lead around an airport by a mustachioed man.

What propels you to keep this collection going?

There is something very zen about collecting only one thing. You never know when it is going to come up. It is very relaxing because you are always looking for one thing. You are building a stack. It corresponds to life in that it is very comforting to have have a truly tangible end result to a project and to have a visual acknowledgement of accomplishment. 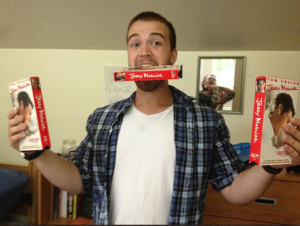 I’ve heard that you have NEVER actually seen Jerry Maguire. Tell us about that.

I have come so far without having watched it, so I want to keep it that way. I like to imagine that someday when I am a 91-year-old rich, old captain of industry figure on my deathbed that I will be the last remaining owner of a VCR. The last thing that I will do before I die is say, “Put the tape in,” and my last moments will be Jerry Maguire.

How much money would you say you have spent on Jerrys?

Well, I have a lot of collaborators, people that know about the collection and help by making a beeline for the Jerrys whenever they see them. So all in all, I would say that I have spent about 37 dollars and 50 cents.

A final note to all of our readers: Anyone and everyone that wants to get involved in Joe’s hunt for Jerrys will be welcomed! Simply buy any VHS copy you see and Joe will reward you with a small commission.