Let me make a couple of things clear first. I’m cautiously neutral towards Yik Yak in the general sense. Often, when people hold themselves and others accountable for content that stays up, Kenyon Yaks can be hilarious. I know that we are capable of maintaining it through intelligent downvoting and self-monitoring. I do acknowledge the problematic content it allows for though, and understand it is not an inherently innocent platform.

That being said, I’ve had a hell of a lot of fun for the past couple weeks. It all started on the first night of Fall Break. I had gotten drunk with a couple of my friends. After a long night of debauchery, I headed off to bed. During my usual ritual of scrolling mindlessly through my various social media apps, I saw Yik Yak sitting there and realized I hadn’t looked at it in a couple of days, so I popped in to check what was going on. That’s when this happened.

Those are all my replies outlined there. Seeing as I am not a first year, I really didn’t know what went down. But that didn’t stop my drunk self from adding the reply that, at the time, I never would have guessed would be the start of something big. I made sure to wait adequate time between replies to make it believable, ensuring that people would be convinced it was a slew of people serving as testimonial to the event.

Rather than explain it all entirely in words, here are a few screenshots depicting the chronological order of events. As you can see, many of the yaks and replies were mine (all outlined in red for the sake of clarity). Ignore the timestamps on the Yaks, I took these screenshots on different days, but it’s still in chronological order.

Starting with the next day… 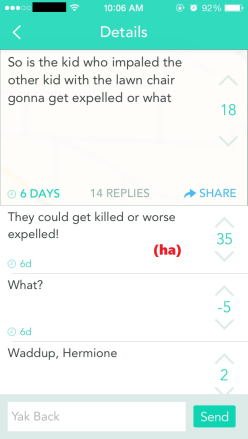 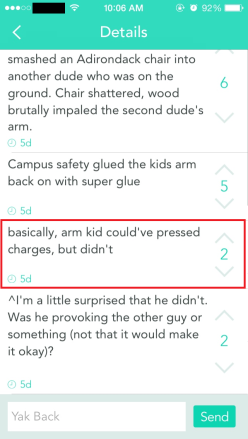 I was starting to get carried away at this point. People were seriously buying into it, and I kept playing along. Perhaps my favorite part was waiting an hour or so, and replying as a person who personally was involved with the incident in some way. For example…

That time I really made it personal. My own roommate was ACAFY. By this point I decided to lay off the grind for a bit. The fire was already burning high, so why stoke the flames too much and risk it going out? So I waited a day, and struck again. This time, I was going for gold. 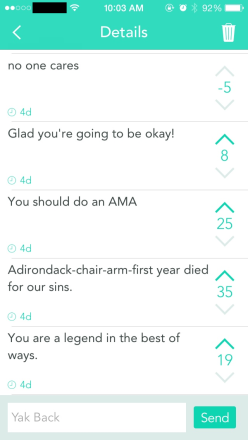 Not only was ACAFY becoming well-known, but people were rallying around him. Be it jokingly or not, it was clearly enough for people to acknowledge. That was shocking to me. But it gets even better. 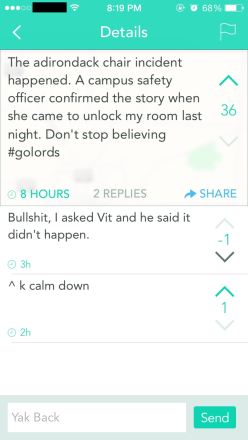 Fellow trolls and the more gullible joined the force as the convincers and the convinced respectively. At this point, people were starting to talk about it in real life. I had dropped a line in several conversations with my peers to see if they knew anything about ACAFY, and it turned out that this little Yik Yak joke had turned into a real life rumor. Groups were casually joking about it during meetings, people were making small references to it on occasion. To top it off, certain unnamed CAs were apparently telling people that it actually happened. I never would have guessed that it would come to this. So, I figured I would lighten the mood with some banter.

Despite absolutely losing my shit at “#doyoubelieveinlifeafterimpalement”, I felt slightly honored in all seriousness. I was worried at first that this rumor could be harmful, that I would have to take steps to actively ensure that it wouldn’t continue to spread. But it seemed like there was more of an outpouring of support than anything. People wanted ACAFY to be ok, which warmed my little heart. 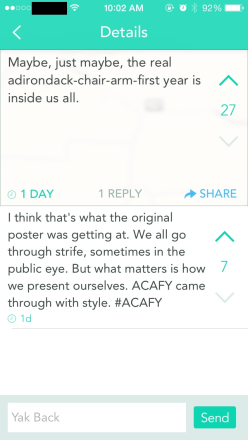 Things have blown over now on Yik Yak. People don’t really mention ACAFY, and since this happened over fall break, a lot of people missed it. But I’ve found that this actually contributed to the confusion, as people were unclear of the origins of the information, having been away from Kenyon’s Yik Yak over break, or not on Yik Yak at all.

But what does all of this really mean? In the end, I was able to start something that went from a small joke to a full blown rumor with a couple taps on my phone. Honestly, that terrifies me. It was exhilarating at first, but then became scarier and scarier as it spiraled out of control. If not for Yik Yak, I wouldn’t have to present evidence to my friends who didn’t believe me when I told them, “Hey, actually, there was no ACAFY. I made it up.” I wouldn’t have to tell them that their CA lied to them, or that the dude in their Stats class who told them that they saw the bloodstain is full of crap. What if this rumor had named names, implicated real people with real consequences?

ACAFY turned out somewhat positive. I couldn’t even fit a good chunk of the more recent positive sentiments, jokes, and references regarding it. But I implore you to join me in casting a wary eye toward Yik Yak. Regardless of Yik Yak’s somewhat rocky past here at Kenyon, it is always important to remember to be a little bit more discerning in our sources of information, especially when you’re going to use it as gossip fuel. Think for a minute about the trustworthiness of the source, the plausibility of the content, and the consequences of spreading it.

Besides, how the hell would the leg of an adirondack chair impaling your arm be the worst of your problems when someone hulk smashes it at you? Come on, people.