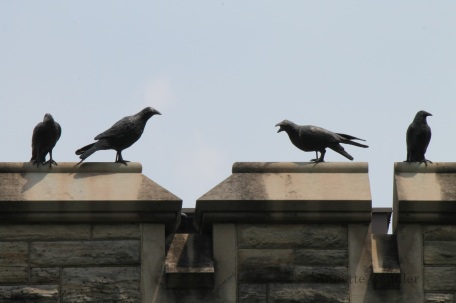 Thrill staffer Matthew Delbridge ’16 crafted a poem in the spirit of Halloween season. Read it after the Jump!

I walked along a dark Middle Path,

A fog my coat around me.

As the drunkenness was wearing off

And by God I was so lonely.

The path was short, “Straight here to there,”

I told myself on leaving.

But in the middle I had stopped and stared

I had looked up and seen the faces,

Their beaks and beady eye slits.

The anemic light seemed to make them move;

Called by the Devil for new prospects.

The Ransom Crows, a murderer’s row,

Were cawing loudly and cavorting.

Poe shook in his grave, a shudder came

To me, and I felt my heart pounding.

They circled round me, getting closer,

Having left their normal lodgings,

I tried to scream but nothing came,

But a pitiful, useless moaning.

The Crows came now, they picked and cackled

I covered my face in terror.

When all seemed lost, a sudden burst,

Of energy seemed my savior.

I ran away, not looking back,

Refusing to join her, Eurydice.

The path ahead looked safe and clear,

The gates, open, looked so enticing.

But as I passed through those Gates of Hell,

The clock on the church struck midnight.

The place I was in was not Gambier,

But something evil; it did not feel right.

I had been transported to the Devil’s lair,

His ugly face staring right into mine.

He gave me a grin, and with a spin

in a font so wickedly twisted,

“Looking for a good job which you’ll never get,

Your college degree’s been wasted.”