A few of the highlights from our trip to Coshocton Ave.

Everybody who’s anybody has heard of the Coshocton Challenge, the famed endeavor to eat at every restaurant along Coshocton Avenue without stopping or vomiting. Most wimps have shied away from the very idea. The Thrill’s editors often joke about completing this task to help raise awareness for the challenge, and every week we all cringe and refuse to participate. But this week, dear readers, Gracie Potter ‘17 and Julia Lindsay ‘18 set out, wide-eyed and bushy tailed, to complete the Coshocton Challenge for the sake of journalism.

This restaurant, presumably named after some long-forgotten French culinary genius, was big. We mean, huge. Even after our burly, poorly dressed, 45-year-old server directed us to the bathroom, we still managed to get lost in a maze of tables and fluorescent light fixtures. (Seriously, turn a few off every once in a while. Gracie’s great-grandmother with cataracts would be able to see her food in blazing color.)

The line to get in was enormous, and no one moved for at least an hour. Finally, in a fit of rage, Julia confronted the hostess directly, who, to her credit, apologized immediately and showed us to yet another waiting area.

The space was incredibly small and smelled faintly of feces, which isn’t necessarily a problem. It wasn’t quite to our taste, but we’ll try anything once.

The dining area’s smellscape was a lot more appealing than the waiting room’s; the scent of pine was everywhere, and Gracie’s Midwestern heritage rejoiced. The design was, however, a bit heavy-handed. We could barely see our plates between all of the miniature trees decorating our industrial-sized table.

We waited for our food for about thirty minutes before getting upset. Forging on in the name of journalism, we decided to storm the kitchen and demand sustenance while refusing to pay for it. When we got there, the chef was nowhere to be found. Nothing was in the fridge. The kitchen drawers were empty. What the hell was happening? 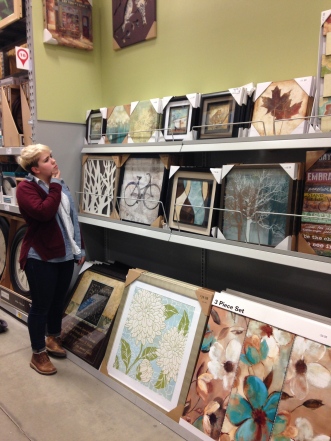 Despite the half-finished construction, the wood planks that just kept getting in the way, and the rather ambivalent disposition of most of the waiters, Lowe’s had some amazing decor that helped to slightly improve the ambiance.

This restaurant, though slightly more appealing due to its modest size, was empty. No one greeted us when we entered, and no one said goodbye when we left. We could have sworn we heard customers having a conversation somewhere, but we think they were lost somewhere in the “boy’s” section.

Getting the waiter’s attention took a little extra effort, but luckily they had megaphones on hand- seems like this must happen a lot!

Once we were finally seated, we noticed something strange about our server. He appeared to be a young boy, roughly 12-14 years old (what is happening to child labor laws in this country?). He wouldn’t stop talking about how his mom took away his Xbox Live because he kept asking girls to “make him a sandwich”.

The food was pretty okay, though our waiter refused to serve it to us. The emphasis on buffet-style dining was overwhelmingly evident. We were expected – no, forced – to cook and carve whole turkeys on our newly-purchased George Foreman grill. We got a pretty good discount, too; Julia even signed up for a Peeble’s credit card!