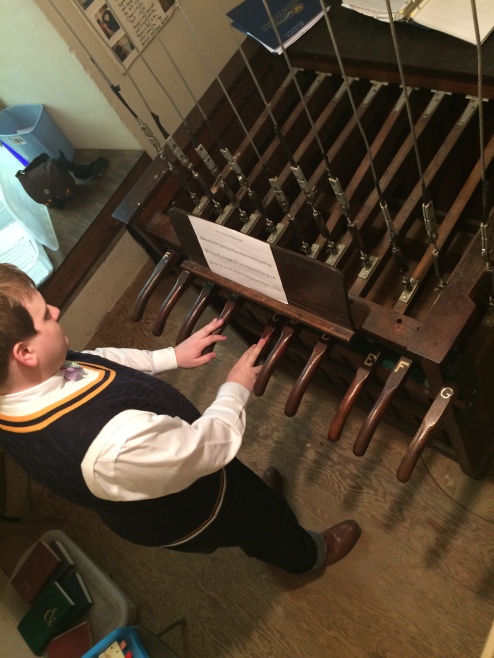 Those strings are connected to BELLS! Music is amazing and so are BELLS!

Have you ever found yourself wondering who rings the church bells every Friday afternoon? Well, wonder no more! This week I went up in the Church of the Holy Spirit’s bell tower to see how it all works.

While the chimes that toll regularly to mark the time of day are automated, every Friday at 4 p.m. several students climb up an extremely narrow spiral staircase to play customized songs on the church bells by hand. They are the pealers: the noble few who play and oftentimes arrange the bell music.

Along with classic Kenyon tunes such as “The Kokosing Farewell” and “The Thrill”, every week the pealers spice up their repertoire with pop songs and film score medleys. If you’ve ever heard strains of “Never Gonna Give You Up” floating through the afternoon air, no, that’s not another Ricky Astley fever dream (all jokes aside, that phenomenon is more common than you think. Psychologists call the dreams Astley-isms). It’s the gosh darn BELLS.

Conor Dugan ’15 has been a pealor since his sophomore year. “I got involved because a girl sent out emails inviting people to come play the bells on Fridays, and I took her up on that.” His favorite piece to play? The Harry Potter medley focusing on Hedwig’s theme.

It can be difficult arranging pieces for pealing, as there are only ten bells (and you music fans out there know that all the chromatic hooziwhatsits in songs are difficult to convey with only the notes of a single scale). However thanks to an E flat bell, songs in both minor and major keys can be played. The sad and the happy. The yin and the yang. Thus is the earth kept in balance.

If you find bells apPEALing, feel free to stop by! “Just come up to the bell tower on Fridays at four,” says Dugan. “Everyone is welcome.” For those who don’t possess an innate knowledge of the church’s inner architecture, the bell tower can be accessed through the tiny door on the right side of the church atop the spiral staircase.

I was asked to note that this Thrill article is slightly incorrect in that “The Imperial March” and “The Final Countdown” are indeed part of the collective bell repertoire. And the Rugrats theme was played in my very presence! What a time to be alive.