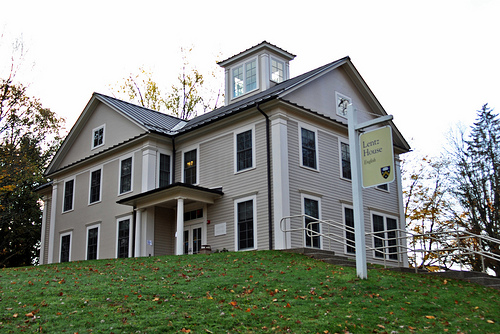 Lentz House, the home of the biggest major on campus.

Kenyon’s students aren’t (usually) the most competitive bunch, perhaps best evidenced by the fact that if you ask the average student what the most popular major on campus is, you’re likely to hear “Uh, English maybe?” or “I think I heard Econ got a lot of freshpersons this year” in response.

But, luckily for you, The Thrill is here to confirm that both of those guesses are at least kind of right. We reached out to Registrar Ellen Harbourt, who provided this breakdown of Kenyon’s major offerings by the numbers:

Now, technically the largest major isn’t listed here – 547 Kenyon students are currently undeclared. That said, the largest group of decisive Lords and Ladies are the English majors, with a total of 189 students. Econ is the closest runner up, with 126 pupils shuffling off to 8:10s, clutching calculators.

The smallest major, on the other hand, is much smaller – Russian Area Studies, with one student declared. Even so, Modern Languages and Literatures Chair Marta Sierra stressed that while the Area Studies major might look small, the Russian department itself is mighty, with several declared minors, students studying Russian as part of the MLL major, and potential-but-as-of-yet undeclared Area Studies majors.

Other competitors for the honor of most unusual major are German, with four students and Women’s and Gender Studies, with five students. Three students are completing synoptic majors.