I got this tattoo a week before graduation with my sister. We both got ours in the same place – left wrist. She got the state of Ohio and I got one of the moon. I was thinking about it for a while and I decided to do something simple, and I like the idea of the moon because, at the time, I was graduating high school, and my family was moving away – like, I was gonna have no friends where I came back to in the summer – but I realized that the moon is not averse to change, because it has to change, because of science and the tides and stuff. So I realized that we should not be averse to change and that we should welcome it, just as the moon does. ~ Stephanie Holstein, ’18

Me and my older sister had wanted our first tattoos for a while, so we decided we were going to get them together, and this was just before she was going to college. We decided to get a bow that represents togetherness, and it’s also part of this childhood song that we both listened to a lot with our dad – “Tie a Yellow Ribbon Around the Old Oak Tree”. We both got them on our left inner ankles, small ones to start. ~ Sydney Kapelus, ’18

I got my tattoo because I have kind of a thing for angels. It sounds a little cheesy, but I believe that there are certain people that come into your life that are put there for a reason, to impact your life. I got a halo (although according to some people, it’s also a UFO, a pizza, or a pair of lips) for all of the angels in my life who are here right now and also those who can’t stay in [my life] for the long run. I got it with my mom; she has a Celtic cross. ~ Maggie Doyle, ’18 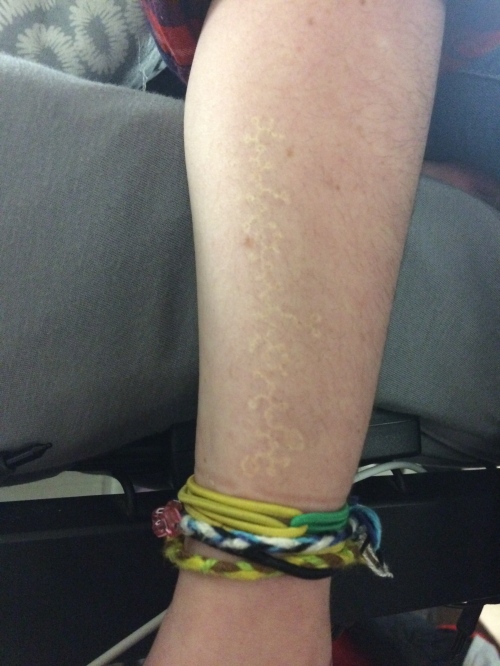 It’s an amino acid sequence which spells out “star stuff”, which is a Carl Sagan quote – “we are star stuff”. I got it because I think that it’s a really grounding idea, to realize that we are all equally a part of the universe: us, planets, stars. We are as big and as small as all of that. ~ Anna Libertin, ’18

This one is a shoutout to one of my favorite songs of all time; basically every chorus and every verse is a different maxim by which I try to live my life. Also I think Lil’ Jon might be my biological father, so this is also a shoutout to him. (If anyone has person contact with him or his management, please – I’d love to finally meet my papa after all these years. But if that’s not possible, I would also accept backstage passes and maybe an autographed case of CRUNK!!! with an accompanying certificate of authenticity, thank you.) ~ Treen Collens, ’16