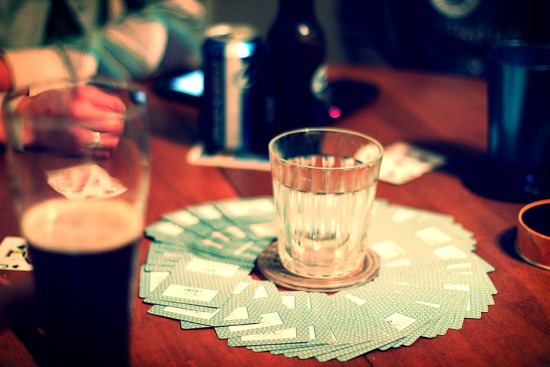 Remember, way back, when you went to one of your first parties. And maybe you were invited to play or saw people playing some sort of card/quarter/ball game with drinks. And you wanted, so desperately, to play and enjoy and connect and maybe find someone that just gets you. But instead, you sat in the corner and drank that dumb, warm beer. You said to yourself (or maybe even out loud): I don’t even know how to play. Gone are the days of lost socialization due to ignorance. Gone are the days of confusing rules explained in a drunken haze.

Today we begin a journey–a path that takes us along the #rivers and #roads of drinking games. This goes out to all the people that were too shy to ask why are you flipping the cup upside down? or what does the 2 of spades mean? Because today team, we’re going to begin this process of collecting as many drinking games as we can with a classic: King’s Cup. Let the record show that every and all drinking games have variations based on region, high school, and zodiac sign. Below is just one version of the time-honored, dare I say, classic game.

Players gather around a cup which has cards evenly distributed around it.

Players take turns picking cards. Each card requires an action, that are as follows: