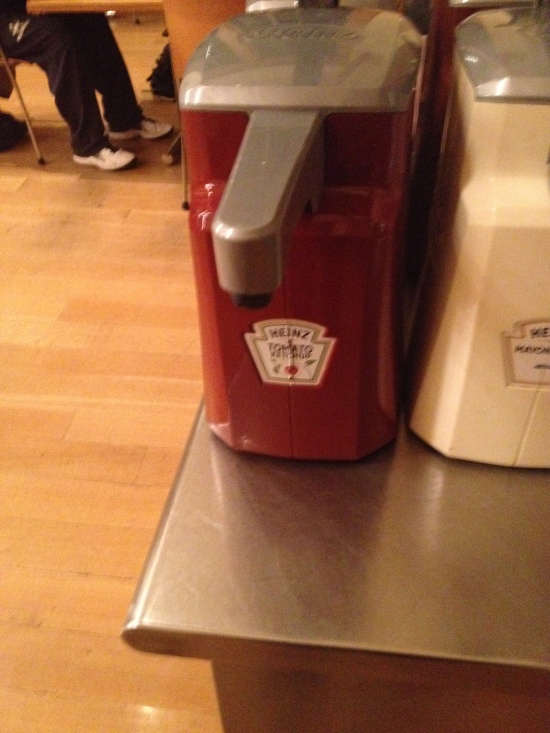 Ketchup is, of course, a tomato-based sauce commonly used to compliment various dishes, especially in American cuisine. But do you know how its made? Well I’m going to tell you. You take tomatoes, sugar, vinegar, salt, spices, onion, and garlic. The more ketchup you want to make, the more ingredients you use. You take the tomatoes and put them in a bowl, then put that bowl in the microwave. Turn the microwave on and melt the tomatoes. This makes the tomatoes into tomato liquid. Then you take the bowl out of the microwave and put all the other ingredients in. Shake the bowl up and down without a cover to mix everything up. After that, you’re almost done. Take your feet and step in the bowl to squish everything together. Don’t wash your feet first. When your feet are totally covered with the mixture, then you’re done. Wipe the stuff off your feet and put it in a bottle. That’s ketchup. Throw anything left in the bowl away because that’s not ketchup. You’ve now made ketchup. It’s the Friday Ketchup.

After both Ted Cruz and John Kasich suspended their campaigns this week, it is now all but certain that Donald Trump will be the Republican presidential nominee. Trumps rivals ended their bids for the nomination after losing the Indiana primary on Tuesday to the real estate mogul turned political upstart. Trump will officially obtain the Republican nomination this July at the party’s convention in July.

So I guess this means it’s going to be Trump versus Hillary in the general election, huh? Well who would’ve thought that? Certainly not me. I for sure thought it was going to be Lindsey Graham and Lincoln Chaffee facing off in November. I mean, those two were clearly the front-runners the entire time. But I guess the American people have made their voices heard. And on the Republican side, that voice is a deeply bigoted and scared one.

The Annapolis police used the controversial Stingray device in an attempt to hunt down a deliveryman who stole $50 worth of food from a restaurant. The device, which acts like a cellphone tower, collects pings from all nearby phones, allowing police to track the phones’ location and even listen in on phone conversations. The man, who stole 15 chicken wings and three subs, was not caught.

Well this is certainly troubling. How can the police let such a terrible villain get away!? I mean, what kind of monster steals that much food? The Annapolis Police Department needs to throw everything they have into catching this guy. Who knows where he could strike next? Heck, maybe he’ll just show up to a grocery store and steal everything in it! He has to be stopped at all costs.

This was the Friday Ketchup!