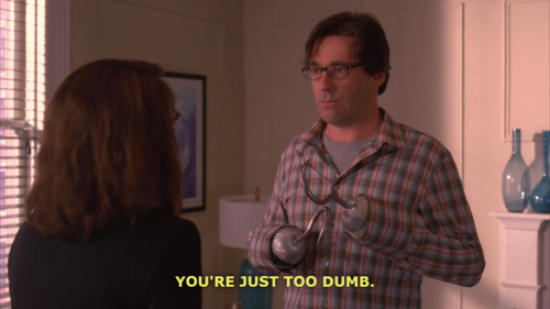 You heard it here first, folks: Legendary faux ad executive and frequent SNL guest star Jon Hamm will not – I repeat, will NOT – be participating in a dramatic reading of scenes from “TAPE,” a theater project regarding the power dynamics of sexual assault. Though this reading will still be taking place Thursday, February 23rd at 8 p.m. in Rosse Hall, it will not include the presence of this particular Famous Handsome Boy.

An email sent to the Kenyon student body cited a “late schedule conflict” as the reason for both Hamm’s and actor Kimberly Parker Green’s cancellation. The reading will now include Bryan Doerries ’98, Brendan Griffin ’02, actor Josh Hamilton of “Manchester by the Sea” and actor Kathryn Erbe of “Law and Order: Criminal Intent.” Despite Hamm’s dumb conflict, it’s looking like it’s still going to be a pretty dope event.

To be honest, I’m relieved. I really didn’t want to confront a superstar in my current un-showered, over-stressed and under-slept pre-comps state. He would have gotten one whiff of my life stench and hightailed it off this hill. Or maybe he would have ignored the less-than-savory bits of Kenyon life, instead choosing to be charmed by the white peaks of Old Kenyon and the loose, soggy gravel of Middle Path. Who’s to say, really? I’m certainly not qualified to render that kind of judgement. Regardless, I’m definitely going to continue laughing at this whole ordeal due to an entirely misplaced and deeply personal sense of abandonment.