March 30, 2017 By Thrill staff in Features Tags: bookstore, brought to you by ethan fuirst, it happened to me, its all andrew's fault 1 Comment 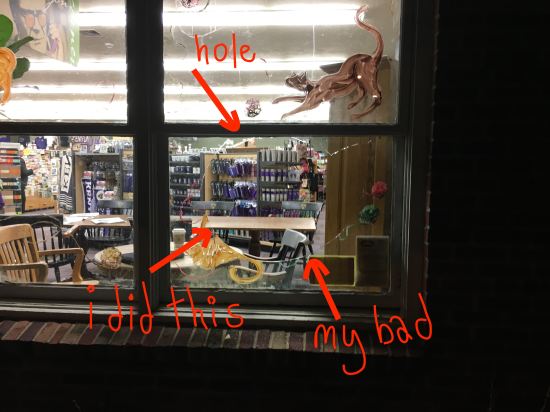 There’s a table in the bookstore that I’ve been particularly fond of for a few years now. It’s a little round ditty for two next to the window. It’s a perfect location– isolated enough to share private sagas of heartbreak and friendship, but it is also snug up against the window so passersby can see how many friends I have. At that very table, I’ve had some of the best conversations of the past few years.  More importantly, I’ve heard (and spilled) really juicy gossip at that table (using a volume just quiet enough so that the bookstore customers can’t hear what I’m saying, but just loud enough so that they know they’re missing something good). One could say I became a man at that table. At the very least, I’ve eaten thousands of over-priced chocolate-covered almonds there.

Like many other weekday nights throughout my college career, I was sitting at that Very Special Table on a Monday in February. The windows were painted with cute scenes of innocent kittens playing with balls of yarn. My friend Andrew Perelman (whose name I use in full so that if any future employers google him, they know about his involvement) walked by on the sidewalk outside and saw me at the table. He came up to the window and waved.

It should be noted that I startle easily.

Andrew’s wave through the window caught the periphery of my vision. I was startled. I jumped in my chair. In a move of self-defense, I swung my arm around to fight back at whatever I assumed was attacking me.

Coming in hot, my hand hit the window. I smashed through the body of one of the kittens, shattering the glass. It all happened so fast. At one moment, there was a window. At the next moment, there wasn’t! And little ole me was responsible for the whole thing.

Upon hearing the not-so-gentle sound of glass shattering, the bookstore customers whipped around to stare at me and the window. Then there was this weird moment when no one in the bookstore really knew what to do. Andrew and I were both unhurt. My damage was neither intentional nor malicious.

We all stood around for a moment or two pondering how completely avoidable this situation was and that I was entirely at fault. Then everyone returned to their lives… Except there was still a giant hole in the side of the bookstore ushering in swells of winter air.

I called Campus Safety because no one had tattled on me yet. They asked me to which of the two adjacent south windows they should send their officers. I stared at the options wondering how to clarify. One window pane remained an untouched tableau of docile kittens and their dear balls of yarn. The other window was a brutal wreckage of miscellaneous cat limbs lunging into shards of glass. “Just look for the broken window. You can’t miss it.”

When Campus Safety arrived, I immediately owned up to the whole thing, hoping they would applaud my honesty. The way I saw it, either I would be taken away in handcuffs or there would be a parade held in honor of my integrity. Turns out, the officers were just confused because the situation was so stupid. The official report now reads, “Ethan Fuirst advises he was startled while sitting inside the bookstore and broke the south window.” I hope that in due time, my gravestone bears the same text.

Most everyone who saw the broken window commented on how round the hole was (I’m including this detail so that if any future employers google me, they know about my precision in property damage). I would be lying to say I didn’t pick up a shard of broken glass featuring a cat’s loose foot as a souvenir. Depending on how my life goes, that piece of glass could end up in the Smithsonian.

I want to acknowledge that everyone who should have been mad at me was incredibly understanding and gracious, especially considering the whole situation is frankly so unbelievably stupid. The Campus Safety officers were kind. Angus, the bookstore manager, warmly shook my hand the next day. And Robin, the woman who painted the kittens that I violently massacred, gave me a hug. Sometimes in situations in which 21-year-old men break windows, people have a tendency to get angry. This time, everyone defaulted to kindness and forgiveness. I’m mucho grateful.

I don’t think there can be any lessons yielded from a situation this stupid. I accidentally broke a window because someone was waving hello. Whoops? The way I see it, either I’m an obnoxious idiot whose inability to be aware of my surroundings makes me prone to property damage…. Or I’m just really damn strong! I’m choosing to believe the latter.

The window has now been replaced. Currently, it features a painting of a proud chicken (coincidently, my most-adored animal). I still like to sit at that Very Special Table with my chocolate-covered almonds look through window, enjoying the new glass. One could say that I finally left my mark on Kenyon. One could also say the whole thing is completely absurd and not worth sentimentalizing.