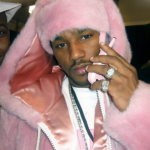 Do you know that kind of Friday night; it’s cold outside, nothing (nothing) is happening, and everyone somehow ends up at the only thing that’s going on. So for the fall concert, Cam’ron (of Hey Ma fame) was set to perform at the famed Fall Concert at the Horn Gallery. So you can imagine, it’s a pretty small venue— and when Kenyon students hear of a minor-celebrity-mostly-of-note-from-the-mid-to-late-2000s—THEY COME. So almost everyone gets to the Horn at like 9:30, I didn’t get there until about 9:45. And I am not exaggerating when I say this, there were at least 200 people not even inside the Horn. Mind you it’s…uh… 30 degrees outside. We are deep in the throes of November. People are shoving and pushing. No one is even allowed inside yet, people are banging on the doors. Infrastructure was at a seriously vulnerable moment.

picture quality not awesome but memories are forever

I and a couple friends decided to head back to McBride (ily, imy) to drink more alcohol to brave the fierce freezing temperatures. So when we come back, it’s like 10:15 at this point. Finally, people have made it into the venue. I am still standing outside at this point. I somehow push my way towards the front— literally there is no room to breathe. The entire space is swamped with students. People are easily standing well up that hill, by that tree. At this point I have been hearing several different rumors. I heard someone say that they “swore they just saw him pull up” while others reported that he is still at the Holiday Inn Express and demanding dinner (would give moooooooney to know where they took Cam’ron for dinner in Mount Vernon; I would kiss the floor). We had the place surrounded. We are all here to see Cam’ron give the performance of a lifetime.

People are getting restless—and finally, the king himself makes his way through the doors. The Horn Gallery is the most explosive I’ve ever seen it. I watched a dude climb onto the cross beam and just sit there. People were throwing their full body weight against each other. It was very clear that Cam’ron was nearly beside himself. To put yourself in his shoes, he did drive through miles and miles of cornfields just to get here. He probably wasn’t expecting this resounding insanity.

The best part is that Cam’ron performed for probably total of fifteen minutes. He played *max* 5 different songs, each no more than a minute and a half before a harsh transition to the next song. He played Hey Ma— the crowd got even crazier if that is even possible. And then, he signed off his performance with the fateful “Kenyon University y’all one of the craziest crowds I have ever seen.” You could literally feel the self-righteousness quadruple within the audience. Kenyon has never been more proud of itself.

And then during the rush of getting in and out of the venue, the mob broke the door. The Cam’ron night was forever memorialized in the Village Record (RIP also). No one will ever know the literal mob mentality Cam’ron brought to Kenyon— which brings me to my final point….Sendoff?