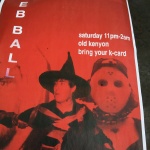 Hey, Kenyon. I haven’t done one of these in a while but I feel like this Saturday is bringing about a topic we very much need to discuss on this campus. Namely, respecting trans and gender non-conforming students by being active and responsible allies instead of passive ones. The most important thing to remember in reading this article, whether you’re a fan of Deb Ball or not, is that allyship takes work. Allyship can be challenging. When your views and opinions are being challenged by a minority group who just wants you to hear them out, instead of shutting down and becoming defensive, you should listen. Our pain doesn’t come from sensitivity— it comes from history. It comes from real, tangible experiences and emotions. Your actions, even in the Kenyon bubble, do not occur in a vacuum. You are responsible for what you choose to pay attention to and what you choose to ignore. With that being said, I, as an openly nonbinary and queer student of Kenyon College, would like to discuss Deb Ball. Thank you in advance for keeping an open mind.

The details for the 2017 Deb Ball Facebook event brought about a mess of mixed feelings for me. The PEEPs’ cheerful invite proclaims that “this is NOT a ‘crossdressing’ themed event” and that “trivializing the struggles of our trans or gender non-conforming friends is not the intent of the ball.” While this is a good start and I appreciate the effort the PEEPs are making to make this event more welcoming for trans and gender non-conforming students, I must remain critical of the event as a whole. This is not because I have anything against the PEEPs as an organization or their desire to throw an all-campus party that invites students to “dress however the fuck they want.” I just think it is important (especially for the current first-year class) to keep in mind how this event has been framed in the past and how it has inflicted (and continues to inflict) violence upon trans and gender non-conforming Kenyon students. I also would like this campus to consider the difference between taking responsibility for past violences (and actively working to deconstruct those violences) versus claiming to take responsibility (without doing the work to back those claims).

Just last year, despite the PEEPs insisting that Deb Ball was not meant to trivialize the experiences of trans students (and that crossdressing was not the point of the party), many Kenyon students still dressed as the “opposite” gender. I’m not going to spend this whole article discussing why this is a shitty thing to do. Read one of my old Queer 101 posts, have a discussion with a Women’s and Gender Studies professor, or hit up Google if you don’t understand how dressing as another gender when you’re cis inflicts violence on trans people. Instead, I’m going to tell you why I can’t attend this party, why many other gender non-conforming students can’t attend this party, and why gender non-conforming students who do attend this party go with caution and care, remembering its history and feeling the weight of past exclusions.

Essentially, people who don’t take the time to read the PEEPs invite/posters, people who don’t give a crap about trans students, or people who think that they can be cis and experiment with gender in a non-hurtful way are still going to show up to the party wearing outfits (a.k.a costumes) without having experienced the violence that comes with gender non-conformity. I am definitely not trying to say that cis women can’t wear “traditionally masculine” clothes and that cis men can’t wear “traditionally feminine” attire. You can experiment with gender however you want. But if you as a cis person do it because of an event, make it into an event, or “crossdress” as a costume (by the way, in case I didn’t make this clear, the phrase “crossdress” is transphobic. Again– questions? Do some Googling), that trivializes the feelings and experiences of trans folx, even if you aren’t trying to make it into a joke.

I contacted the leaders of PEEPs to see if they had any comments on the events’ history or any actions planned for the future to make Deb Ball more trans-friendly. Alex Bennett ’18 and Ellie Manos ’18 informed me that they “would not like to comment at this time” and that their official statement is as follows:

“A common misconception about this event is that it is a crossdressing event, and while many people do choose to dress in the stereotypical clothes of a gender they do not identify with (which is perfectly fine and great!), that is by no means the purpose of this party. We in no way want to trivialize the plight of trans people in today’s world by making their identity into a costume or party theme. The PEEPs are a safe, inclusive community; ALL are welcome and ALL are celebrated” -Jackie Arkush ’16.

While a public statement about the intent of the party indicates basic knowledge of trans issues, if you ask a trans person whether or not it is “perfectly fine and great” for someone to “dress in the stereotypical clothes of a gender they do not identify with” as a costume for a party, said trans person would consider this poor allyship at best and violence at worst. Even if you don’t want to “trivialize the plight of trans people in today’s world by making their identity into a costume or party theme,” this does not mean that this isn’t the affect your event has on the trans and nonbinary community. Also, admitting that people are still going to ignore your intentions and “crossdress” turns this disclaimer into a hollow statement. This is not enough. This is irresponsible allyship. I would encourage the PEEPs to reach out to actual trans and nonbinary people to see how they can make this event less painful for our community. Furthermore, how many trans and nonbinary people are in your “safe, inclusive community?” Do trans and nonbinary individuals feel comfortable attempting to join an organization that hosts this kind of party? These are the kinds of questions cis people need to ask themselves before deciding that they’re absolved of transphobic actions.

My primary issue with the event is this: trans kids get called names for how they look. They get stares, glares, questioning glances, worried glances, and apologetic “I-don’t-want-to-offend-you-but-I-don’t-know-how-to-act-around-you” glances. They get beat up, harassed, pathologized, and even killed, just for doing what you as a cis person have the luxury of doing for one night and one night only. In the morning, you can scrub off the eyeshadow or fake beard, step out of the high heels, hang up the backwards caps, and go back to your “normal” life. You can go back to wearing “normal” clothes, confidently walking around with the privilege of identifying with the gender you were assigned at birth. We can’t do that. We wear what we wear and look how we look every day because that’s who we are.

Attempting to transform the event into a “let’s all dress crazy and let loose” kind of deal also rests uncomfortably with me for several reasons. First of all, it implies that the next-best-thing to “crossdressing” (in terms of defying societal norms, even though “crossdressing” just reinforces those norms– again, this would be a good discussion to have with a WGS professor) is transness. i.e: “trans people are ‘other’ and if we don’t want to be transphobic anymore but still want to dress crazy, we’ll just make this a dress crazy party!” Trans people are not cis people dressed like crazy. Transness is an identity– a culture– which means this party has a history of being culturally appropriative. Yet again, I want to remind everybody that just last year, Deb Ball was described by most of this campus as a “crossdressing party.”

I’d like to clarify that I’m not calling everyone who attends Deb Ball transphobic. I’m just insisting that you take a moment (before donning that wild outfit) to think about the context of the party you’re attending. Think about your cis privilege and remember that there’s a population of students on campus who can’t go to this event because they don’t feel safe doing so. These students (myself included) have been walking around all week with the weight of Deb Ball on their backs. That’s not to say that all the people going to Deb Ball don’t have the right to experiment with their gender. Some trans people attempt to put a positive spin on Deb Ball. In other words, here are the people I am not calling out in this article:

If you don’t fall into the above categories, or even if you do fall into the above categories, I urge you to consider why you’re choosing this event as the one where you’re experimenting with or freely expressing your gender. There are plenty of queer events on campus that welcome both trans and questioning students alike. Both allies and queer students are invited to attend, especially if they’re seeking a safe space to experiment with identity and gender expression. Again, I’m not trying to stop gender non-conforming folx from dressing however they want and going to Deb Ball. Instead, I am inviting all of you to keep in mind how this event made trans and nonbinary Kenyon students of the past and present feel, and how cis people will interpret your attendance at the Ball.

At the end of the day, it’s your decision whether or not you go to Deb Ball. Either way, please consider how you might be contributing to cisnormative power structures that exclude gender non-conforming folx from certain spaces. Also, if you’re a cis person thinking about “crossdressing,” don’t. If you do, I can no longer consider you my ally and will have trouble considering you my friend. Be better and do your research, cis Kenyon. We don’t want to fight with you. We just want you to make us feel welcome.