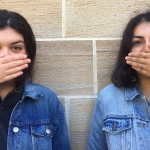 We’re BACK, and this time it’s with our very own Grandma Thrill Yasmin Nesbat ’18 (I was informed by one of my editors that this is indeed her official title) and Emma Raible ’20. Donning denim jackets, both girls are American Studies majors. Emma is a Leo and INFJ while Yasmin is an ENTJ and is a Libra that identifies more as a Leo…could this be a Kenyon Doppelganger pair orchestrated by the cosmos?

When my editor sent me on assignment this week to cover a pair of alleged Kenyon Doppelgangers I, of course, dipped my toes in a little bit of social media reviewing: Facebook, Instagram, nothing creepy and, honestly, it didn’t do me too much good because I was still hesitant when I first ran into Emma in the servery (that being said, after running into Emma, I did have an easier time recognizing Yasmin).

“So do you guys think you look like each other? Have you ever been mistaken for one another?” I asked Yasmin and Emma as we sat down to lunch. My quick dip into social media didn’t have me convinced quite yet that they were quite “doppelganger” material.

While Yasmin, a senior, had never had a Whoops-I-thought-you-were-Emma moment. Emma revealed that it had happened maybe once or twice. “I think it’s the similar style, the dark hair,” Emma said.

Yasmin agreed, saying that she could definitely see people confusing them from far away. “Lisa from the omelet line actually told me the other day [she and Emma] looked alike,” as Yasmin speculated on the confusion between her and Emma. Yasmin’s roommate, Savannah Daniels ’18 is also a strong supporter of the resemblance.

What sealed the deal for this reporter was from the nose up. After wrestling with the theory for a few minutes, I had both Yasmin and Emma hold a hand up to cover their noses and mouths and voi-freakin’-là. Look at those beautifully, identically arched left eyebrows! Look at those beauteous brown eyes! That gorgeous, American Studies major dark hair! Maybe they’re not carbon copies of one another, but if you switched around Yasmin’s and Emma’s top and bottom halves of their faces it’d be a pretty difficult issue of Highlights’ Spot the Difference.