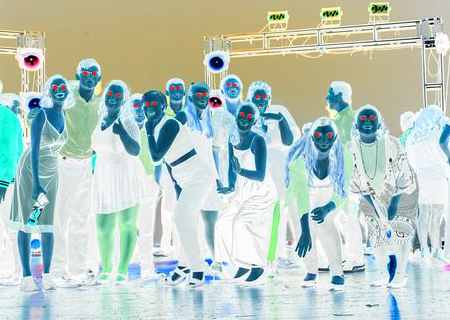 After spending a long time in the Kenyon Bubble, venturing outside can be a surreal and stressful situation. All of a sudden, the Kenyon social mores disappear and you need to actually look up when crossing the street. It gets even weirder when you do so with other Kenyon students, creating a liminal space between the familiarity of Kenyon and the alien space of the outside. And that’s exacerbated even more when the space you are going is already one of the weirdest places on the planet. And, Reader, I went to such a place.

Every year, my a cappella group (lol) goes to a competition—you know, the one in Pitch Perfect but, like, the Ohio version—because we want to take singing, something we’re relatively comfortable with, and add dancing, something most of us are deeply uncomfortable with. It’s great.

But every year, stepping into this space feels like exiting the earth and astral projecting into an extradimensional world where all our earth laws are inverses. You see, here, people believe that if you turn up the beatbox and bass microphones high enough, a cappella will become cool. Pentatonix and their ilk play on every speaker. Hordes of people warm up and run their sets in the halls. Almost every dance is 95% pelvic pulsations to the music. It’s terrifying.

The only why I can even think to describe the event is “heterosexual.” A surprising majority of the set saw groups split up into pairs of one woman and one man, which also means that that perfect gender balance is something they kept in mind while auditioning people? I dunno man. Couple that with this deeply masculine competitive energy and I just really wanted to tell everyone that this is a cappella and we’re being silly.

This event also marks pretty much the only time I have cause (or want) to step into a high school since graduating. And I discovered that even though I’ve only been out of high school for about two years, I am very behind on the lingo. Did you know that they’re using “DM me” to mean “text me” now? I looked down at my hands and saw how deeply they had aged.

I complain a lot about this college because it’s a. fake and b. ridiculous, but at least things make sense here. A cappella isn’t cool and we all try to dress like frumpy grandparents from the ankles up and wear very expensive shoes. Just let me be at peace! Until next year.