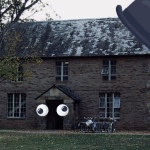 Okay, I know every college student since the beginning of higher education likes to complain about their dormitory, but here’s the thing: Watson dorm is unlike any other dorm experience you can or will have on Kenyon’s campus. I have lived here since August (with the added bonus of moving in early, as a Peer Counselor for training) and I have compiled such a wide and vast collection of experiences in this place that it feels like I’ve lived seven separate lives, all of which have been marked by some absolutely batshit occurrences. Nothing you will read on this or any website will be able to convey to you the full experience, but come with me, won’t you? Come with me on this journey.

Sometimes the basement screams. I know the basement seems like an odd place to start, but I live just above it and so it’s constantly on my mind, and sometimes, gang? The basement screams. It started with that first short power outage (which–you know what, can we talk about that at some point? Where is our electricity going? Is it being siphoned for some kind of dark magic? Probably) and since then has come back seemingly at random. Somewhere down in the basement, near the laundry machines, there is some kind of alarm that has the piercing shriek that sounds less like an alarm than it sounds like one very big and terrible bat. And this bat likes to scream and scream and never let me nap. There is absolutely nothing which determines when the bat will shout, but it will, and you just have to deal with it.

Something is always burning. Watson has a kitchen, and I think that was probably a sweet gesture at first (“these kids have to live in the Upside Down from Stranger Things, they should get to make pasta sometimes”) but it has absolutely backfired. That is a pun, but I’m deadly serious, some shit is always burning or on fire here. It usually smells like someone ruined a pizza to the point where it smells both like fire and black licorice for some reason? I don’t have any idea why, but it is a constant smell in this place, and I hate it.

Do you remember that episode of “The Twilight Zone” when a college junior walks into his dorm bathroom to find the walls of a shower absolutely slathered in some kind of slime? No, you don’t, because it didn’t happen in an episode of “The Twilight Zone”–it happened to me, Nathan Scott Winer, a real life boy who very badly wanted to take a shower, but couldn’t because of the veritable second wall made of slime in his favorite shower. This one sucked and also scared the shit out of me, my brain immediately jumped to ectoplasm, and though I know now it was probably body wash or something it definitely seemed like ghost evidence. There are probably ghosts in my dorm and they hate shower walls.

Animals will be here without anyone letting them in. I’ve seen a cat that belongs to no one, and also about fifteen thousand bugs, which I guess isn’t so unusual but when everything else in your living space feels like a curse, a horde of bugs takes on a vaguely Biblical-plague-like vibe. And that vibe fucking sucks, let me tell you.

Watson is another plane of existence where no one is allowed to speak to each other. I have two pretty decent friends in this dorm, and we speak very often outside of this building, but within the confines of Watson there’s an unspoken rule that we can’t exchange more than two sentences per day, or else some kind of minor deity or spirit will visit misfortunes upon us in the night. I have lived next to people for two thirds of a year and I have absolutely no idea what their voices sound like.

People come and go from this hall like it’s a game of the Sims and someone is swapping out people and I genuinely live in constant fear that one day my time will come. Where do the people who leave Watson go? Are they happier there? Almost definitely.

One day I think Watson will descend back into the ground, swallowed whole by Gaia the Earth goddess in her final act of benevolence to man.

The water pressure, though, is honestly not too bad. Caples was worse.