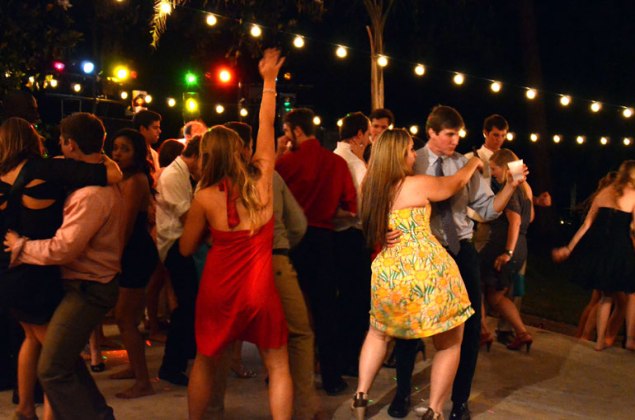 I guess I should have known that pulling up to the Zeta formal wearing jeans wasn’t going to fly. The two girls out in front seemed to be running a very tight ship—and don’t get me wrong I respect the rules—I just wasn’t aware that in order to attend a middle school dance in Colburn you needed a Prada gown. That said, obviously, I put on the fanciest thing I own for my own formal, so I don’t really have any validity in my bitterness.

This year’s formal season has been pretty wild to say the least. The Archons threw down in Colburn as well. As an Archon myself, I can attest to this. They told us we could invite three friends each so obviously I told every single person I saw on Middle Path, Peirce, and in my friend group. And, obviously maybe like two of them showed up. The Bat Mitzvah vibes were high and thriving and the pink Franzia was truly flowing. Through my blurry haze, I can remember walking in and all of a sudden an overwhelming rush of my past came over me. The boys were in one corner, the girls in another, the wine was in the middle. I had the great urge to begin dancing as if I was apart of the high school musical number “We’re all in this together” and so I did, very aggressively. Non-Archons began showing up towards the end only to find that yes, indeed we were having a blast impersonating middle schoolers and the majority of them left upon entering.

It’s funny how Colburn itself just seems to scream middle school dance. I mean you walk in, the bathroom is immediately to your left and there’s one square dance floor screaming “dance the Cotton Eye Joe!!” You can’t hide. It’s just inevitable that you will be seen by the fellow dancers so you might as well be as awkward as possible. The alcohol is being served behind what looks like a shitty old picnic table in your grandma’s basement. The best part though is the blank tan wall that everyone poses in front of in their 5-inch heels.

I’m fairly certain formal season is marked by Instagram pictures. I’m not even kidding one night my friends and I dressed up for 30 minutes, went to that wall took some pictures, went back home and changed into jeans and went out again.

I don’t know about the formal’s of the Theta’s Bta’s or any other sorority or fraternity ending in eta, but I do know that everyone who dressed up and danced the night away seemed to have a great time. Maybe next year I’ll sneak in the back of Colburn (is there even a back of Colburn??)  to the Zeta formal to get my revenge.