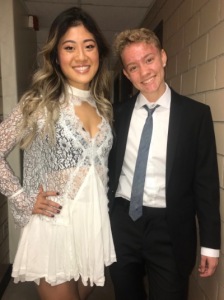 I don’t feel like I’m walking that fast, but I can hear the strained breath of my English teacher behind me. She complains.

The boys let me lead because when I asked. They thought I would make the ten-mile hike easy. I don’t think they knew what they were getting into. These types of strenuous activities are what my active family members trained me for. The quick pace I set distracts me from my English teacher (whose son had just broken up with me) and the discomfort I have with the young cis men taking their shirts off around me because of the heat. I’m not attracted to them, I just wish I could do the same without a reprimand.

It’s senior retreat. Before I cut my hair. Before going to college. Before I felt that I could shirk that perfect princess persona for something that fit a little more comfortably.

The boys around me are not just boys I don’t like, they are boys I actively hate. Maybe it was a secret jealousy, or maybe it was the inappropriate comments they made about women around me. Or maybe, even still, it was the way they ran down the mountain later on, when all I could manage was a slow walk for fear of falling. Security in my body was not a luxury I had, and these boys had made that clear by the times they had groped me or my friends.

My least favorite of the pack began asking me questions about my sexuality. This was a line of questioning I was used to as a conventionally attractive, feminine presenting queer person. I had been out as bi for almost three years at that point. I’d publicly had girlfriends and boyfriends, and I felt comfortable discussing that, it was not a source of shame. For me, my sexuality was much easier to understand than my gender. It was simpler to understand how I relate to others than to examine how I relate to myself.

What a stupid question. I replied by saying that I don’t have a preference for either. By that point, I already identified as Pansexual (gender doesn’t have anything to do with my sexual preference) but that was harder for people to wrap their head around. (I also understood that he was asking whether I liked men more than women even though he was talking about genitals, which are not the same thing).

It sticks out in my mind. As I bounded up that mountain, the way I do with any obstacle, I found myself remembering all the times I was asked to play on the “boys” teams in gym class because I was “better” at soccer. I remembered my brother asking me to be the fourth player in his game of Halo, or to play laser tag with him and his friends.

I always loved it. To be honest, I loved racing up that mountain and talking about girls. It felt normal in a way that playing on the girls soccer team didn’t. I felt like I shouldn’t love it though, like I wasn’t meant to be happy in this space. It felt forbidden. When I watched my brother play his video games, I was too scared to ask to play them myself. It was a line I wasn’t meant to cross.

I started playing women’s rugby my freshman year. I knew people on the team and they seemed free and open. Things I wanted to be, but didn’t feel comfortable enough in myself to express yet. Freshman year brought about a lot of realizations, but one of the biggest was that I liked being on a team, I liked feeling strong with other people.

After a few weeks of rugby practice I looked in the mirror and cried. I had never felt connected to my body before the moment I felt strong. I realize while writing this, I had never cared to look at my body much before college, other than to admire it as something others might find attractive. I was looking through a filter of what others see when they see me, not what I saw myself. When I actually saw muscle definition, when I finally felt something good about what I saw in the mirror, it clicked.

This is why it can be hard to explain transness to cis people. You all focus a lot on the dysphoria part, but not as much on the euphoria part. Dysphoria is hard to describe, and hard to understand. A general discomfort you’ve been feeling your whole life can be almost impossible to put into words. Gender euphoria is much easier for me to explain. The feeling of relief at finally understanding what you need. Wearing a suit for the first time. Being called handsome by a significant other. Getting a haircut that actually suits me, and not the wishes of others.

I joined rugby on a whim. The people on the women’s team made me feel so cared for, and I found the sport relieved a lot of anxieties I had throughout the day. My gender was up in the air, but I wasn’t ready to talk about it. How could I talk about something that I should never have touched in the first place? 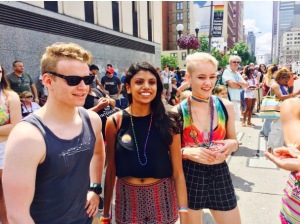 I remember going to my first rugby practice when I wasn’t sure what was going on with my gender. When we went around and said pronouns, I said “I don’t care what pronouns you use for me”. What I really meant was, “I DON’T KNOW PLEASE HELP ME!”

We as trans people are often told that if we don’t know exactly who we are from the start, then we aren’t valid. Transness often comes with confusion. I didn’t know what was going on inside of me, I barely knew any sense of self. And I was used to not knowing for my whole life.

And that’s okay, and it should be more okay. People get there eventually.

After leaving school for medical reasons sophomore year, coming back to school, with a new diagnosis and a new gender (and without the comfort of my best friend) worried me. I felt prepared though. I knew myself, finally, as a man.

I was concerned about what would happen with rugby. I knew I wasn’t the only trans person on the “women’s” team. I also knew what the men’s rugby team had been in the past, and my image was one of pure gender exclusivity and toxic masculinity. I didn’t trust that they would accept me. I thought I was too small, too queer, hadn’t been on T long enough, and tackling would trigger too much PTSD. I worried that I would have to stop doing rugby all-together.

I got lucky. The team wasn’t as shitty as it had been in the past, and even though the men didn’t know me well, the president of men’s rugby asked me to come out and practice with them. Sometimes that’s all it really takes. When you’re the first person to do something terrifying, it feels like the terrifying thing controls you. Sometimes, you just need someone to tell you it’s okay to jump in feet first.

There are obvious differences. I had a different childhood. I have a different life, full of crazy complications. Being socialized female is different, and I see the world through a different lens than most of the boys on the team. I find that I am often the one who has to call them out for shit. I am physically smaller. And I know that. And when people remind me of that, I get a little pissed off. I worried a lot in the beginning about whether or not I belonged there, and if this could ever actually work.

At the end of the season, I had three different players come up to me and say they were so glad that I joined, on separate occasions. This was the thing I feared I would never get for all those years. It wasn’t that doing those activities would be wrong, it was that I would never be accepted as me in doing them. My core belief was that I would always be considered the “girl”, like I was in PE when I was six. I would be there, but I wouldn’t belong there.

Gender euphoria can be climbing up a mountain faster than a bunch of douchebag guys. It can be wearing a suit to your first formal in the correct attire. It can be tackling the shit out of someone who outweighs you by 100 pounds.

Or it can be a pat on the back, and a message of “you matter to us, and we are so glad you’re here” from exactly the people you need to hear it from.

I’m glad I was socialized the way I was. I’m glad I see the world the way I do. It has been an honest joy to be able to learn who I am, and fight for his existence. I am proud of that fight, and overjoyed that I get to feel comfortable in my skin finally. When Max said that shit about me being a “Swing Hitta” he was making an idiotic joke about my sexuality, but I think it more refers to my gender.

Being a “Swing Hitta” is the shit. Being trans is incredibly difficult, but it’s also beautiful, and strong, and lovely. I get to have experienced more, and lived more than most people can fathom. I get to appreciate every day, because I had to fight for my right to wake up in the morning.

I wouldn’t want to be anyone else, and I’m so honored by those who fought before me so I could play a stupid game with a bunch of dumb boys, and laugh my ass off while doing it.

May all the intersectional activists who’ve fallen, rest in power.

Keep up the fight, and remember that you deserve to be here, experiencing all the joy you can.