HOW DID THIS HAPPEN?

When I first decided to join Take Five as a joke to write a Thrill article, I was afraid my plan wouldn’t be fully realized because a cappella groups often take first years and sophomores, but almost never take juniors. Luckily I had a man on the inside. 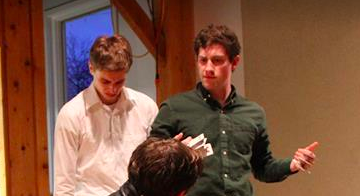 One Thomas Stanton, pictured above in a shot from the Renegade play we did together. (Six Characters in Search of an Author. I played Boy, a ghostly prepubescent shadow who commits suicide in the finale via finger-guns. Thomas played Actor #3 who becomes a tree. It’s a stupid play.) He was in the group already, and using his boyish charm he was able to manipulate a group of talented musical professionals into taking me, despite my tone-deaf audition in which I sang the theme from Terry Gilliam’s bureaucratic comedy Brazil (1985). That, and the urging of one May Chen, who told me I had a singer’s neck (as it turns out, you can’t tell if someone’s a good singer by looking at their neck). And that was that, I was a part of Kenyon’s jazz a cappella group despite hating jazz.

After joining the group I was privy to all the dirty secrets of Kenyon’s seedy and too-various a cappella underworld.

WHAT DID I LEARN?

A little music theory. It took about five separate people to explain it with me, with charts, pianos, diagrams, and occasionally candy, but I know about things like intervals; the spaces between notes, and how those come to form chords.

I learned that I can’t arrange music. I spent probably sixty hours on my first solo only to present the group with seven measures of clunky, dissonant chords over the main melody before Thomas graciously said, “Why don’t I just take it from here?”

Uh, what else. Oh! I’ve got one. On the first day, we all sat around in a circle and they told me that they loved me and if I ever needed support they would be there. So, take that! A cappella groups can be very…loving. Hmm. Okay. So I learned about unconditional love.

I learned that I can’t snap in time, and that white people can’t dance because they move to the words not the beat. I learned that I black out when I perform for large enough crowds and because of this, I don’t remember winking in two (2) separate concert solos.

What a goddamn charmer.

I learned that if you get called for last minute second round callbacks, “So sorry we never do this we just need you to come back to the NCA” they will make you sweat for forty minutes, trying to get you to guess what note running water makes, before whipping out bottles of champagne. I learned that peppermint patty shots are chocolate syrup first, then schnapps, and that everyone in the a-community needs a drink to get through the concerts, even when you’re performing in them.

I learned that I can trick an entire group into singing a Radiohead song, and that my time on tour has inspired my backup career as a masseuse in Philadelphia. But most importantly, I learned who some of my greatest, closest friends were. Someone described Take Five as “weirdly intimate” and although I only joined to write this article and never actually sang once in my two years, I have to say I fell under their spell. Never had I met a more supportive, loving, non-judgmental group of people.

Not to mention, some of the most talented individuals and great friends I’ve had to DATE, who along with this group have wrote their own music (solo or in a band), performed in musicals, plays, and paint, host photo exhibits, write elaborate sociology theses and sexy plays about aliens.

Once, I had to cancel plans with someone because of Take Five. This person said sarcastically, “Oh right, because jazz a cappella is the most important thing right?” And with a completely straight face I said to them, “That’s right.”

This article idea was given to me by Els Dusek