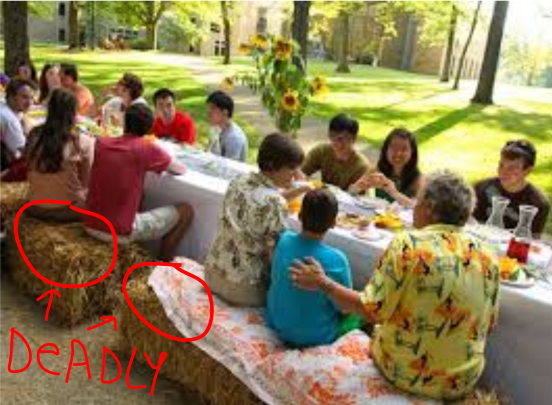 The Community Feast was held Friday, that beloved back-to-school tradition during which students, faculty, and children (not counting students) share laughter, stories, and a hearty midwestern meal along Middle Path. There is pie, there is corn, there are bales of hay for people to sit on. It is a lovely tradition. Or so I’m told.

I have a severe hay allergy, airborne and everything, so on the first Friday of the year, when the school lays down thousands of pounds of the allergen from the Gates of Hell to Smather Hall, I have no choice but to flee. I retreat to a northern corner of campus, alone, hungry (so hungry), my precious airways clear, but my pride deeply wounded.

I, personally, suffer from the presence of hay, and I, personally, feel that is enough of a reason to alter a decades-old tradition serving an entire community of people. But if you don’t, there are other reasons, not all about me, why the hay seating is bad.

It smells bad, for one thing. The feast is a culinary event, and hay smells bad. It’s also uncomfortable to sit on. Sure, it’s been awhile, but I remember the ungentle bite of straw yet. Maybe cowboys, with mud-caked jeans and thick upper-thigh hair, can sit comfortably on a bale of hay, but we are not cowboys. We are students. We are soft. And it is summer. We should be able to wear shorts and not have our legs sliced up by our seats.

What really gets me, though, is that the hay presents a logistical nightmare for the Feast organizers. Have you ever thought about how much work it is to pack up several literal tons of hay, haul it up the hill, unload it onto Middle Path, set up the feast, have the feast, take down the feast, reload the hay, sweep up the excess strands, haul everything back down the hill, and drop it off at whatever barn it came from, all in the span of a few hours, all in the late August heat?

Why? Why does Kenyon do that? Why don’t we all just sit on the grass?? Because it’s “tradition??” Because it looks ““rustic””???

I say all of this with zero hope that the school will quit it with the hay, at least while I’m still here. I don’t know how many other students have my same allergy, but I know there are a lot students with disabilities who are unable to attend community events, not just the Feast,  because of the wider lack of accessibility on this campus.

I wouldn’t expect the school to address my admittedly uncommon issue when it hasn’t even made Ascension accessible or paved middle path so that people with mobility issues can go on it or addressed the mold and dust making students sick in the New Apts and Caples or properly invested in mental health services on campus BUT, I digress.

Next August, when the hay is brought out and the people gather ‘round in celebration of learning and loving on this shining hill, you’ll know where to find me.

At the bar at the VI, where I can breathe.