October 14, 2019 By Thrill staff in Internal Affairs Leave a comment 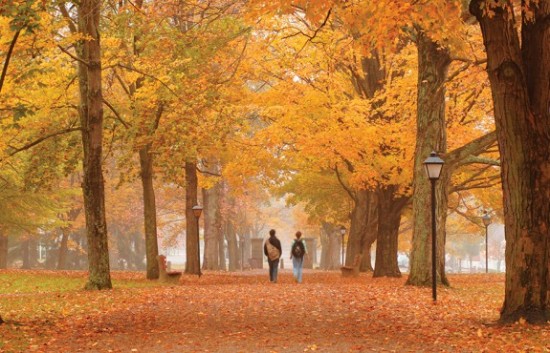 Fall Break came and went, but we will carry the weird memories forever, close to our hearts. This mid-semester respite almost always feels more like a pre-Thanksgiving tease. We have asked our first year writers to reflect on their time on campus, travels and everything in between.

What a strange four days in Gambier. 12 pm is my new 8 am. My money has been completely squandered on transportation and snacks. I did none of my work. I walked to random places around campus to not do work and just…sat. I watched the entire Demi Lovato documentary and have so many thoughts. I rode around Mount Vernon for maybe 3 hours on the KAT and wasn’t frustrated at all.  It was almost thrilling, actually. Also, I saw the Joker and hated it, so take that Vice readers and Reddit users! By the way, the timing of Fall Break is kind of weird? It is sandwiched between two holidays: Yom Kippur and Columbus Day but does not overlap with either of them (fuck Columbus though, so respect I guess). Alas, here we are. Fall break is over, so I can finally feel like a human being again. I have a newfound appreciation both for my friends who I missed dearly while they were away and for my friends who stuck it out with me in the haze of break. -Sydney Fallon

I went home for fall break and packed in as much coastal Connecticut leisure as possible. I visited the French bakery where I work three times in three days, including on Sunday morning right before getting in the car to come back to Kenyon, and my boss gave me a tray of cinnamon rolls (a new product!) on the house, which was very nice of him, and I hope my friends who have heard so much about the bakery in the two months I’ve been in Ohio enjoy them because I sure do. -Molly McLaughlin

Fall break was like my encounter with a horde of embarrassingly drunk freshmen on Wednesday afternoon: disoriented, poorly-timed, and a reason to question the point of it all. -Theresa Carr

I stayed at Kenyon for fall break, which pretty much meant I spent 50% of the time in a Claritin coma and the other 50% waiting outside of an NCA. -Zoe Appelbaum

Being a first-year, you’d think it might be hard to immerse myself in the strangeness that fall break can bring. But after staying here on campus for 3 out of the 4 break days, I am here to tell you that this wasn’t the case. I think the best way to prove this is to give a day-by-day breakdown of what this long weekend looked like for me.
Thursday: slept until an hour I don’t want to reveal in case my mom reads this, watched an ungodly amount of Bojack Horseman and had an argument with my friend about which first-year dorm has the best tasting water fountain.
Friday: walked on the BFEC trails pretending to be a baby forest witch, watched The Joker and left in a state of deep discomfort that I immediately snapped out of after my friend got a door shut on his pinkie toe, and sat in a circle on the floor outside of Mather with my friends singing Enrique Iglesias’ I Like It.
Saturday: Simultaneously worked feverishly on an essay about Shakespeare and floated in and out of the bathroom while my friend dyed her hair pink.
Sunday: Took a day trip to Columbus with my sole motivations being purchasing a maxi dress and eating at a Jewish deli. -Sydney Schulman