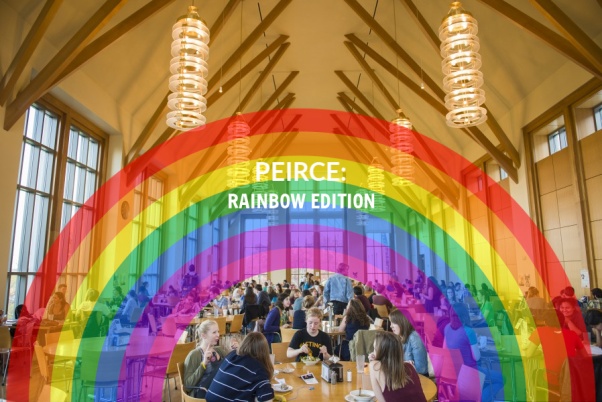 Have you ever wanted to ROY G BIV your diet and ruin your life? Well, then this article is for you! This week, I forced  myself to eat only one color a day for each of my Peirce meals (which, in my case, are only lunch and dinner because I refuse to practice healthy habits or wake up before 10 a.m.). A week of pure hell ensued: tears were shed, nutrients were lost… the grumbling of my stomach could be heard for miles around. Oh, the things I do for my fans.

Disclaimer: I am in no way trying to shit on Peirce, AVI workers, or the wonderful meals served in our dining hall! The choice to malnourish myself was purely my own and it was all for a good chuckle, haha. I also want to make it clear that we at the Thrill do not promote unhealthy eating habits, only a love of top notch comedy and tomfoolery.

On Monday, all of my meals were brown; even though I wanted to stick to the Rainbow Aesthetic of this challenge and go with blue/purple, I also knew that I would perish if I only ate purple cabbage and raw onions.

Lunch: I ate a Beyond Burger (with no mayo, so like, bad vibes all around), some rice, and a brownie (fitting). Past the fact that the Beyond Burger smelled like the Rummage Sale bin in my hall last spring, it was pretty damn good. I left feeling unsatisfied and wanting nothing more than to chow down on a cherry tomato.

Dinner: Not gonna lie, even though this was one of the most visually unappealing meals I’ve ever had, this shit slapped. From left to right: pad thai (sans vegetables), brown rice with soy sauce, tortilla chips, and black bean, kalamata olive, and pumpkin hummuses (hummi?). I don’t know what on earth inspired Peirce to have so many goddamn types of hummus in the first place, but boy oh boy, there’s nothing that gets my juices a-flowin’ more. Eating that much brown mush at once combined with the full cup of chocolate milk brought me back to my pre-k days and I can’t say I’m mad about it.

Lunch: As a vegetarian and a lover of vegetables, I thought that Green Day (lol) would be easy peasy. Alas, I was a dumb, overconfident slut. I made a depressing wrap with uber salty edamame, green peppers, almost-frozen peas, broccoli, spinach, some hot & soggy kale, and a dollop of pesto mayo. I also ate like, a third of a green apple but had to stop because I have weak teeth and will most likely need dentures before I turn 30. A friend of mine said that she was “not green with envy”, which I only wanted to include to shame her for saying something so deeply unfunny and offensive.

Dinner: Dinner was just as bleak. I enjoyed a bowl of edamame, broccoli salad, cold zucchini, and pesto mayo with a side of green beans. For dessert, after painstakingly picking out the orange ones, I had green Apple Jacks and a pear. My will to go on was in the garbage but nevertheless I persevered! 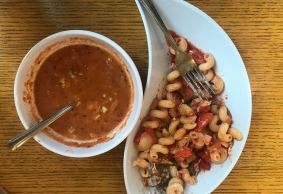 Lunch: For lunch I had a bowl of tomato and eggplant soup, which was more orange than red, and some beet hummus, which was clearly purple, but a girl’s gotta eat. I had a side of heavily salted tomatoes (hell yeah) and some red peppers. I treated myself to a bowl of strawberry ice cream mixed with raspberry jam, which sent my blood sugar through the roof, but also ensured that I wasn’t a hangry bitch.

Dinner: I had two more bowls of the tomato and eggplant soup and some pasta with marinara sauce, which I’m pretty sure gave me highkey heartburn but whatever lol!! At this point in my journey I was ready to get out my flamethrower and set fire to all the tomatoes in Knox County.

Overall Rating: ★★★★ The Red Scare has finally come to Kenyon.

Lunch: One of my saddest meals yet, Yellow Lunch consisted of french fries with honey mustard, egg salad, and a singular yellow pepper because #health. I love a good Peirce fry, but pairing them with a condiment that tastes like sour milk and feet really dampened my mood.

Dinner: Because I didn’t want to unleash the horrors of the nacho cheese onto my mortal form, I found a loophole and went with the mac and cheese bowl, topped with even more cheese!! I then moved onto a grilled cheese complete with 4 American Kraft Singles, which I have an obsession with because my mom raised me on nothing but Organic non-GMO grass-fed fruit leathers from Whole Foods and this is my rebellion. I finished off this healthy ensemble with a banana and some yellow beans because I wanted to balance out my lactose-intolerance-y dinner and be the skinny legend my mom tells me I am.

N/A: My parents were in town so I planned on mooching off of them for as much time as possible.

Do I recommend this challenge? No. Did I have fun? Debatable. Would I wish this on my worst enemy? Absolutely not. Did I learn anything? Yes– that I have a limited amount of willpower and self-control that can only be accessed when I’m being a dumbass.