This summer I did something Halloween themed that was utterly stupid and I need to talk about it.

About three hours from Houston is the historically haunted Yorktown Memorial Hospital. On a whim, my girlfriend and I decided that we should road trip to rural West Texas for a private tour of the abandoned facility. In retrospect, I based this decision off of my pride in tolerating American Horror Story and a love for basic crime podcasts. Comparing a real haunted hospital to a horror movie is like playing real tennis after training on the Wii.

We rolled up to the hospital around midday. The woman whose phone number I found via a Google review told me to Venmo twenty bucks to her personal account and show up before a group of ghost hunters could do their overnight ghosthunting. When we showed up, it was just us and a middle-aged man with a key and a flashlight.

After ignoring all of the obvious red flags in this scenario (sorry Mom) I let this man guide us through the first hallway of the haunted hospital. Yorktown Memorial Hospital was built in 1951 and was run by the Felician Sisters of The Roman Catholic Church until it became a drug rehab center in 1986. It was finally decommissioned, and abandoned, in 1992.

Here are a few photos from Yorktown: 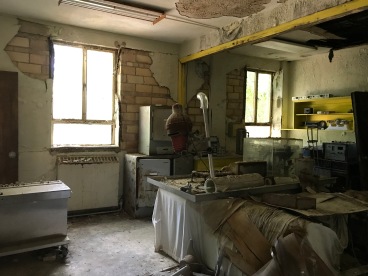 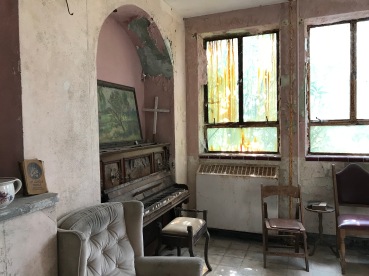 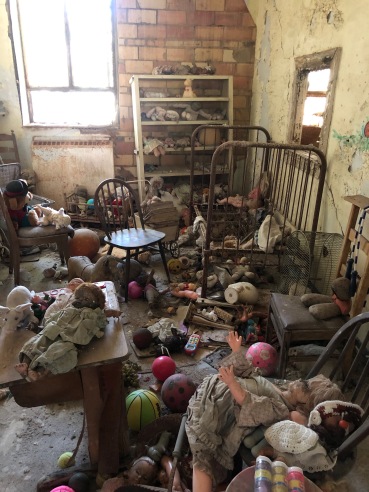 Thirty seconds into the visit, our tour guide announced that his wife usually leads the tours, but ever since she was scratched by a ghost she has yet to step foot in the hospital. He then told other stories about how people sometimes leave possessed with the spirit of one of the old patients, and that over a thousand patients had died there because of malpractice.

I tried to keep my cool. Beside me, my girlfriend (a complete non-believer in ghosts) was essentially stoic in the abandoned emergency room and doll-filled nursery. When we walked to the nursery, I began to panic. The tour guide said that empaths have more of an emotional reaction to this room. Confusing his paranormal definition of the word empath with someone who shows empathy, I immediately convinced myself that I was possessed by one of the dolls. My hands began to tingle (dehydration) and my throat started to close (dust allergy).

The final straw was the abandoned Chapel. Being in rural Texas with my girlfriend already felt a little unsettling, but entering an abandoned Catholic chapel full of spirits of angry nuns was next level. Noticing I was hesitant to enter, our tour guide asked if I had tattoos. Apparently, the spirit nuns are known for scratching guests with tattoos. Not only was I queer in rural Texas, but I was queer with several tattoos and possibly already in the process of being possessed by a spirit of some small ghost child.

I watched the award-winning CBS drama Medium as a seven year old, so I have a long childhood history of persuading myself that I see ghosts. All in all, I lasted a solid fifteen minutes of the tour. I sat in my car (parked across the street in front of Subway) on the phone with my sister who was trying to convince me that I wasn’t actually possessed. Meanwhile. my girlfriend continued with the tour, and even walked around alone for twenty minutes to take more photos. On the record, I still feel bad abandoning her with our old man tour guide, but leaving the hospital was a matter of life or death.

Ultimately, I ended up not getting possessed by the ghost children, and hopefully wasn’t exposed to too much asbestos. But if you find yourself in rural Texas soon, I definitely recommend visiting Yorktown Memorial Hospital if Kenyon’s ghost stories aren’t scary enough for you. Happy Halloween!