At my interview to get into this school, when asked what I liked about the campus so far, my answer was “the buildings.” Maybe it’s a trivial matter or maybe I was just nervous, but you have to admit there’s nothing like walking into almost 200-year old buildings for class every day.

END_OF_DOCUMENT_TOKEN_TO_BE_REPLACED
May 7, 2015 By Jack in News Tags: bexley hall, I speak for the trees, middle path, trees Leave a comment

The trees that we believe will soon line the northern portion of Middle Path are currently in the process of being unloaded by Bexley Hall. We have no idea when the trees will actually be planted, though an email sent about a month ago said all trees should be in the ground by Commencement, with all work being completed by Reunion Weekend, just in time for the southern portion of Middle Path to be torn up and replaced.Tree-lightful! 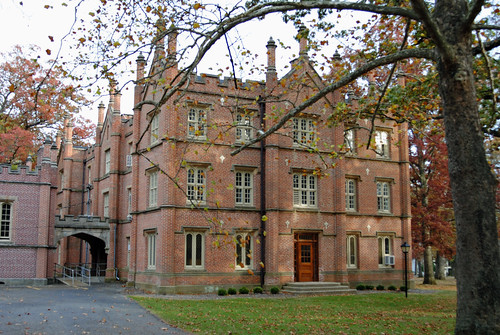 Last night, Student Council minutes quietly announced that the Bexely parking lot will be prepared for student use. We confirmed this with Chief Business Officer, Mark Kohlman via email earlier today. END_OF_DOCUMENT_TOKEN_TO_BE_REPLACED

This post was co-written by Thrill staff writers Matt Delbridge ’16 and Annaliese Milano ’16.

Imagine: it’s warm and sunny outside and due to the sudden influx of vitamin D, you’re skipping down Middle Path, Yellow Brick Road style. Being the graceful little swan that you are, you catch a toe and bite it—hard. Brushing off your dignity and plucking the gravel from your ass, you turn around to see what tripped you up. Ugh, of course, the little square that looks suspiciously like a trap door. Likeomigod it doesn’t even go here.

We know our besties at The Kenyon Collegian already debunked the rumor that there are tunnels under Middle Path, but we’re still not convinced. Some theories as to what’s really under there:

END_OF_DOCUMENT_TOKEN_TO_BE_REPLACED

Yup, right here! Well, technically he went to the now-closed Bexley Hall seminary. In addition to being a racist who called miscegenation a crime worse than murder, William Montgomery Brown attended the seminary for three years in the 1880s, although he did not actually graduate. (He did, however, manage to get convicted after being charged with heresy, so at least he followed through with that.)

But that was probably an overblown charge, right? “‘I no longer believed in a personal God, nor in a six-day creation, nor in a literal heaven and hell,’ Brown wrote. No fall of man, nor a redemption through the blood of Christ, either. Creeds, he decided, were symbolical, nothing more,” notes the article on Brown in the most recent Alumni Bulletin. Well, maybe that charge of heresy was apt after all.

Brown later became both an Evolutionist and a Communist, writing that “Darwin was now my Old Testament, Marx my New.”

A historic photograph of William Montgomery Br—oh wait, this is Charles Montgomery Burns.