Djerassi in the Reveille.

After the death of “the father of the pill,” Carl Djerassi ’43 we decided to look in the Greenslade Special Collections and Archives to properly honor the man who gave us oral contraceptives and antihistamines. Pictured above is Djerassi’s picture in the ’43 Reveille. Listed among his activities is his membership in the Pre-Med club and the Speech Club. Read more about Djerassi after the break!

END_OF_DOCUMENT_TOKEN_TO_BE_REPLACED 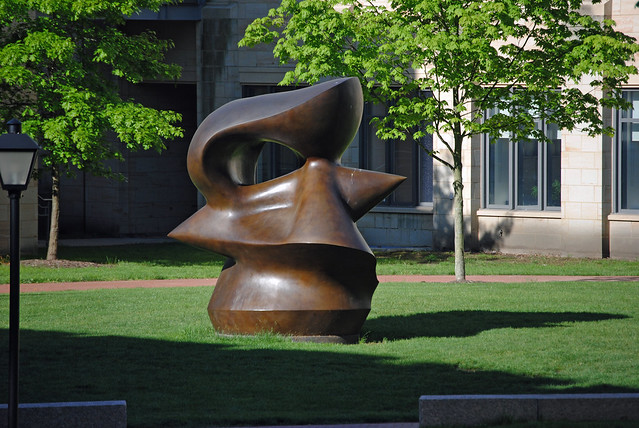 When I first toured Kenyon, as a sophomore in high school tagging along behind my sister, I was told by the tour guide that the giant statue in the Squad was supposed to evoke some kind of cell (neuron? particle?) structure, but students often compared it to a profile of Elvis with a spike stuck through it. Three and a half years later, I’m a sophomore at Kenyon and I’ve never heard it compared to Elvis and I have learned it has nothing to do with any kind of scientific structure.

I know the statue is on loan from Graham Gund, but other than that I knew very little about the statue, as aside from the name (Large Spindle Piece) until I discovered this Collegian article from October 24, 2002, which was written at the time the loan was announced. Read on for more info on Large Spindle Piece than you may care to know (unless you really like sculptures, then maybe its not enough). END_OF_DOCUMENT_TOKEN_TO_BE_REPLACED

December 4, 2014 By Nathaniel Shahan in Features Tags: from the collegian archives, postman Leave a comment

On a completely unrelated note, Kenyon used to have a polo team! via the December 10, 1935 issue

From time to time, the Collegian will write about those Gambier residents who are not affiliated with the college, but interact with students and faculty every day. Let me take you back to 1963, with this profile of then Gambier Postmaster Dell Hathaway. This profile is an honest, and at times humorous, look into the job of a faithful public servant who served students and faculty daily. The piece is from the March 1, 1963 edition of the Collegian, read the whole issue here and read on for the profile. END_OF_DOCUMENT_TOKEN_TO_BE_REPLACED

November 20, 2014 By Nathaniel Shahan in Features Tags: from the collegian archives, General Westmoreland, gun cleaning, kenyon is NOT near uganda, philo 1 Comment

Today, rather than present one article, we would like to present a collection of short, but interesting, snippets from the Collegian throughout the years. Included below are news briefs ranging in topic from a visit by General Westmoreland to a student injured while cleaning a gun.

General William Westmoreland will speak in Rosse Hall on Wednesday, Dec. 4 at 7:30pm. General Westmoreland was the Supreme Commander of the U.S. Forces during the Vietnam War. More recently, he was in the public eye when he sued CBS for libel concerning an hour news segment which accused him of lying to former President Lyndon Johnson. The lecture is co-sponsored by Faculty and Student Lectureships.
November 21, 1985