credit: Apple, their Apple Pencil (2nd Generation), a pencil, made of ghosts (probably), this is how they actually marketed it

Dear The Office of Residential Life,

It has been several years since my last confession. Though I work for you, I feel as if I could do more to work with you. I am a simple person with simple skills. I can ask politely for things I am paying for. I can put an unlimited amount of raw Sriracha in my tiny, tiny mouth. I can peel an orange in one seamless ribbon but usually I can’t. This is my effort to bring my passion for putting people into broad categories (ie. astrology, MBTI, sorting-hat) to you, The Office formally known as Residential Life. Below are what I believe to be some questions which which truly bring insight to the Roommate Pairing Process. You can reach me at wordpress.com, or at your local Post Office.

END_OF_DOCUMENT_TOKEN_TO_BE_REPLACED

Spoiler Alert: She didn’t take any of them! Not out of lack of love or trust, but just because they fell short of her vision, artistically speaking. Stop-motion animation is, perhaps, one of the most difficult artistic crafts in the movie and art-making game, which is why I am so utterly impressed that some of my fellow compatriots are making fantastic feature short films from what we know as the cradle of civilization, Gambier, OH. How these studio art kids find artistic (divine?) inspiration in this tiny town is frankly beyond me. So of course, I gotta take some type of crack at it! God, this might be for a pretty niche audience but I think it’s working. END_OF_DOCUMENT_TOKEN_TO_BE_REPLACED

February 16, 2017 By Annie Blackman in Features Tags: high school, Hockey, internet, it happened to me 1 Comment

Next month, it will have been a year.

In early March of my senior year of high school, winter was shedding its layers and readying itself to welcome spring. But, before it bid the town of Montclair, New Jersey goodbye, winter offered us one last shot at a snow day. Word of the upcoming weather spread quickly. Two days away from the forecast, children across the school district feverishly checked snowdaycalculator.com to validate their hopes. I was one of those children. At 10:15, I got a notification from a classmate, Cameron. He had posted a screenshot from snowdaycalculator.com in the Facebook group of my graduating class. The post read, “Fingers crossed!” followed by a predicted 63% chance for a snow day two days away. I grinned, unabashedly revealing a mouthful braces to the glow of my computer screen. My mind whirred with excitement, and as fan of comedy and attention in general, I wracked my brain for a joke to comment on Cameron’s post. That’s when all hell broke loose.

END_OF_DOCUMENT_TOKEN_TO_BE_REPLACED 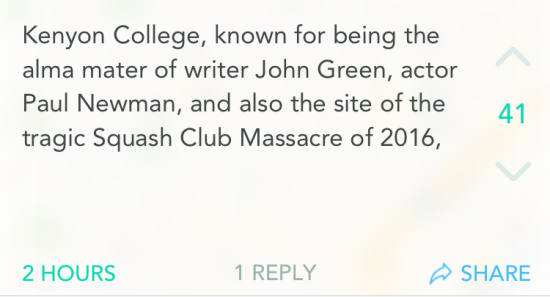 Now that AllStu has fallen out of fashion, email battles are rare at best; the all-out Internet wars of years past have become nothing more than faded memories stored in the recesses of the class of 2016’s collective consciousness. Since the great crisis of 2013, the word “unsubscribe” has lost its luster, and nowadays, the name “Kenny Fedorko” barely rings a bell. We lived, we learned, and we moved on. Or so we thought. END_OF_DOCUMENT_TOKEN_TO_BE_REPLACED

The Lead Story: A year after the Boston marathon bombing, many survivors are trying to make meaning of their experience without being defined by it. The New York Times talks to a pair of brothers whose lives were transformed by the event and details the challenges they’ve endured since the attack.

After The Jump: SNL mocks CNN, Afghanistan contemplates a runoff, the Masters has a new winner, dumb things on Twitter, a tragic shooting in Kansas City, and a media take on Game of Thrones.