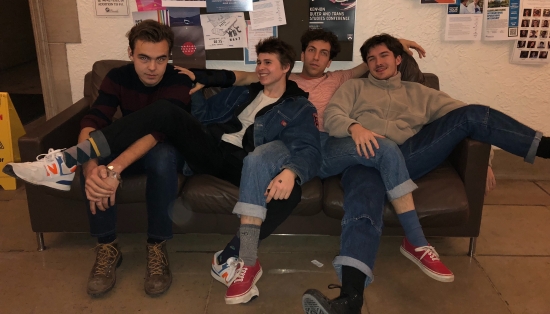 Welcome to In the Studio, a feature dedicated to exploring the fantastic independent musicians at Kenyon. This week, we showcase Wholesome, a four-piece band consisting of Shane Wells ’22 of Nashville, Oliver Pearson ’22 of Los Angeles, and Eli Haberberg ’22 and Elijah Newman ’22 of New York.

END_OF_DOCUMENT_TOKEN_TO_BE_REPLACED

Ned Vogel ’15 is a senior music major who smells completely fine. He serves as treasurer and half of the guitar section of Kenyon’s loudest, heaviest rock and roll band the Flying Hounds. The band also features Tom Cox ’17 on drums, Andrew Clarkson ’16 on bass, and Jack Cox on the other guitar.

Their upcoming album will definitely heighten your emotional state. If you want to feel incorporable pleasure you should check out their Bandcamp.

In order to get some insight into what it means to be a good-time rock-n-roll performer, I performed an interview on Ned. The results are as follows:

END_OF_DOCUMENT_TOKEN_TO_BE_REPLACED

SPORTS: not just for the more athletic among us, or these guys. A Kenyon band comprised of Carmen Perry ’15 (vocals, guitar), James Karlin ’15 (bass), Benji Dossetter ’15 (drums), and Jack Washburn ’16 (guitar), this pop-punk group is dropping a piping hot album in the coming months. I sat down with them to discuss their new record and the recording process.

END_OF_DOCUMENT_TOKEN_TO_BE_REPLACED

So if you were anywhere this Saturday afternoon, you were probably at the Horn Gallery’s annual Fall Festival, Hornucopia. Between games of cornhole, sipping on fresh-pressed apple cider, and getting your face painted by Phoebe Rotter ’14, you probably also saw some ridiculously cool music. And if you weren’t actually doing any of those things, that’s ok – read on for our official recap of the show! END_OF_DOCUMENT_TOKEN_TO_BE_REPLACED

As we reported last week, one of Kenyon’s coolest bands, French Club, is crowdsourcing funding for their upcoming tour with Boston band Basement Beat via Kickstarter. With five more days to go in their campaign, they’ve made good progress, raising over 72% of their $3,280 goal. But they still need $902 — why not head on over to Kickstarter right now and pitch in a few bucks? So far, the bands have 57 backers, but we know they have way more fans than that, or at least 100. If 43 more backers pitch in just $20 each, French Club and Basement Beat could be on their way to fame and fortune, and you can say you were a part of it.

Head to Kickstarter now! Then, check out the tour’s event page and the bands’ Band Camp pages!