October 18, 2016 By Mia Fox in Culture Tags: Questions, the supplement, wet laundry on top of a washer 1 Comment 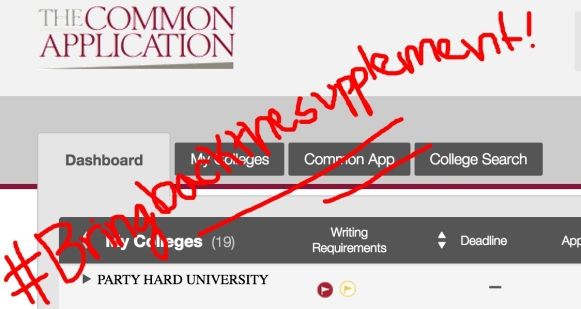 As Kenyon plummets itself into a whirlwind of changes, I find myself asking, “which of Kenyon’s old habits die hard?” (Not many, it turns out.) We’ve got First-year sing and Send-Off and various other rights of passage, and for a while, Kenyon’s supplement to the Common App was one of those things. Just like “no-cell phones on Middle Path” and Cove O’Clock, the supplement to the Common App has become a whisper of a memory – its absence a scapegoat for disgruntled seniors looking to explain perceived mediocrity of underclassmen.

Some background: my older brother also went to Kenyon. During his application process, my family talked all too frequently about what hell was on the edge of “his map” or what he was carving out of a block of stone. Though I never wrote the supplement, I’m all too familiar with its absurdities, and frankly, I want it back. Call me a hypocrite. I don’t care. I want it back in a BAD way. Mmmm. Yeah. So while the administration sorts through my requests to #bringbackthesupplement, peruse these suggested prompts.